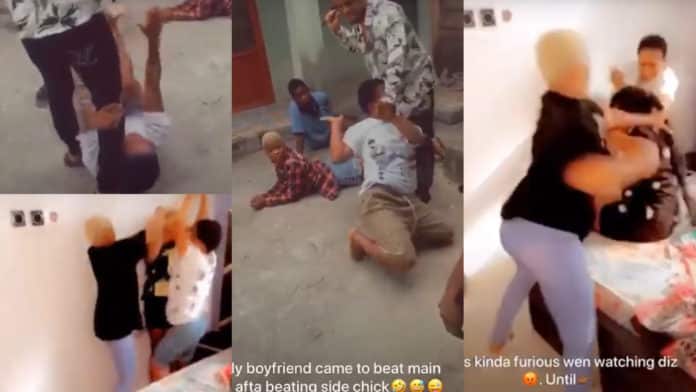 A rivalry between two ladies who were fighting to win the love and favour of a man ended in tears for the one who started the entire fight, the main chic.

The lady who deemed herself as the main chic teamed up with her friends and went to beat up the supposed side chic.

In the said video, the lady and his friends slapped, flogged and kicked the side chic as they warned her sternly to stay off her man.

The main chic was upbeat about her decision to save her relationship from intruders and wreckers who were bent on snatching her man from her.

Therefore, she took the singular decision by visiting the side chic and beating her up.

No sooner had she finished dealing with the side chic than the boyfriend got wind of the information.

Immediately, the boyfriend, whom they were fighting over, and for which reason the main chic went to beat up the side chic, decided to settle the scores.

In settling the scores, he decided to publicly flog the main chic for fighting the side chic. He lined her up with her accomplices and beat them up.

He warned them to stay off the side chic and also intimated that he had the right to pick and choose which of them to give his attention and love to.

The side chic was also given the chance to flog the main chic, paying her back with her own coin.

In a nutshell, the boyfriend signaled to the main chic not to fight for his love.

What do you make of this?