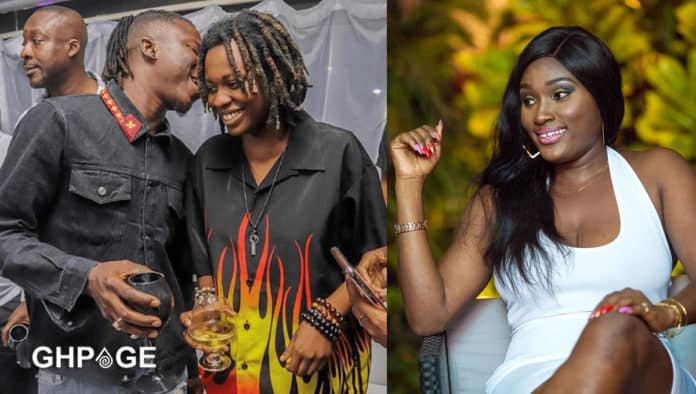 Actress and media personality Abena Ruthy has called on dancehall artiste Stonebwoy to reach out to his former Burniton Music label signee, OV, before “depression finally kills her”.

The plea comes on the back of a viral video that captured the MTN Hitmaker Season 7 winner for the first time since she left the camp of the Stonebwoy with manager Black Cedi and fellow label mate, Kelvynboy, in November 2019.

In a post on Facebook, Ruthy raised concerns about the current state of OV who looks seemingly depressed.

She urged Stonebwoy to reconsider his decision not to sign any artist under his label and bring back OV to refine her.

“Ooh too bad to see OV in her current state. Has she ended her music career?

“In fact, Mr. Livingston Este Setakple aka Stonebwoy shouldn’t have parted ways with the then fast rising star”! Stonebwoy ended or terminated the contract of OV and left her to her fate…,” Ruthy wrote.

“Barely 2months ago, I quizzed about her whereabouts and few days afterwards, “Kelvyn boy on Sammy flex show answered me by saying she’s under rebranding, is this the rebranding” he was talking about?

She continued: “Jesus Christ; I think it’s never too late for Stonebwoy to bring her back under his label to refine” her into the OV we knew that gave us some instants hits such as “want me, zaddy” after mTn Hitmaker .. to avoid any “#HadIKnown” in the future, Stonebwoy should please reconsider his decision for not signing any artist under his label and reach out to OV before “depression finally kills her!!

In February 2020, Stonebwoy told the press that OV was released from the Burniton Music Group due to some internal issues at the label.

However, he said that his doors are always opened for OV if she needs help from him.

OV – real name Barbara Naa Okailey Nyarko – after months of a hiatus from the music industry has bounced back with a whole new look.

She went live on social media as she jammed to O’kenneth joint Agyeiwaa featuring the Asaka boys.

From the video, one could see OV had change and this time has added a nose pirecing to her already known dreadlocks.