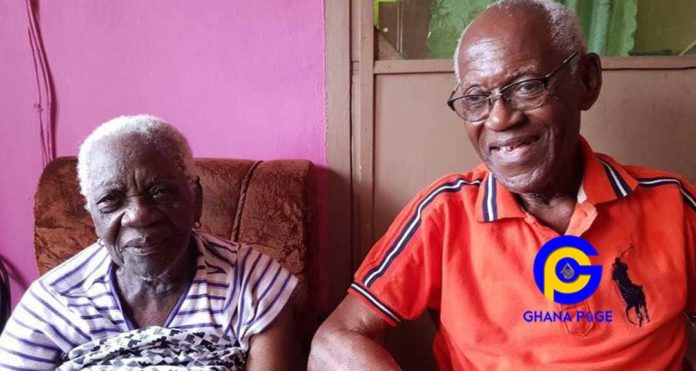 Veteran Ghanaian broadcast journalist, Joachim Awuley Lartey, aka ‘Over To You’ is celebrating his 70th marriage with his wife, Emily Lartebia Adjei over the weekend.

Joe Lartey as he is affectionately called is now 92 years whiles his wife who is slightly older than him is 94 years old. They have been married for the past 70 years.

Joachim Awuley Lartey, a retired Ghanaian commentator, and journalist. He worked with the Ghana Broadcasting Corporation from 1961 to 1973 and 1990, and with Federal Radio Corporation of Nigeria between 1978 and 1990.

During the era of the Supreme Military Council (Ghana), he was involved in the activities of the People’s Movement for Freedom and Justice (PMFJ) that opposed UNIGOV under Gen. Ignatius Kutu Acheampong, working in the trenches with Nana Akufo-Addo, Komla Agbeli Gbedemah, and others.

He moved to Lagos, Nigeria when the leaders of the movement were being pursued, and stayed there until 1990.

On his return in 1990, he hosted programmes such as Sports Digest and Hall of Fame on GTV while teaching public speaking to various groups.

He was the first president of the Sports Writers Association of Ghana (SWAG), of which he is currently a patron. Joe Lartey on his retirement also thought presentation at the Accra Film School.

SEE ALSO: How Sarkodie celebrated Tracy’s birthday with a classic song and dance

Joe Lartey married his beautiful wife, Emily Lartebia Adjei in 1949 and have stayed married to her over the years. Happy 70th anniversary to the wonderful couple.