According to the Artiste Manager, Prince David Osei has been in the entertainment industry for long and expects him to know better.

Bullet stated that Prince David Osei acted shallow and degraded himself in the comments he made about Wendy Shay.

Bullet also added that the interview Wendy Shay granted was edited by the media house and promoted negatively to gain traffic.

He further stated that it is high time some artists are selective and firm in granting interviews to avoid such instances.

“So now, has it gotten to the point that artist would have to be firm in granting interviews? You go through a full interview session and it comes out edited to be promoted negatively just to gain traffic and attention.

@princedavidosei you have been in this industry for ages and it’s expected of you to know better, but how do you degrade yourself and act shallow? What has an artist personal assets got to do with an ambassadorial deal?

Let’s support our own when they are going up and desist from pulling them down each and every time#rufftownrecords”, Bullet wrote on Instagram. 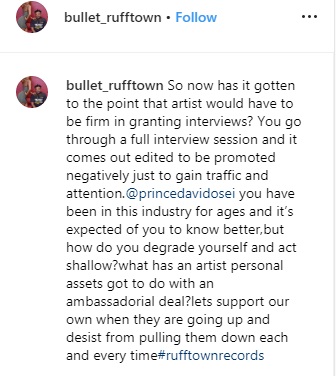 This comes after Wendy Shay in an interview disclosed that ever since she joined RuffTown Records, she can boast of properties like iPhone, iPad, and camera.

Her comment received backlash from Ghanaians with Prince David Osei describing her as shallow-minded.