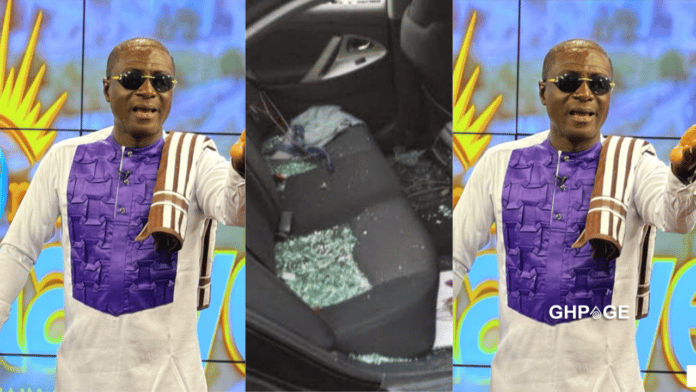 Media General’s Captain Smart was attacked by armed robbers during the weekends at Ada.

As narrated by the astute and vociferous journalist, the armed robbers who broke into his car took away his cash, tablet and other valuables including his slippers and shoes.

Captain Smart who strongly believes the armed robbers were charged by some top politicians to harm him continued that, he saw blood stains in his car after conducting a chemical search inside his destroyed vehicle.

As strongly suggested by Captain Smart, some evil people holding important positions in the country are after his life just because he speaks truth to power.

He also claimed that the people who sent the armed robbers after him are currently scheming another evil plan to get him arrested once again.

And after his arrest, hire an insider to brutalize and wound him in the police cells after aiding him with a knife kept inside a bread.

Brave Captain Smart additionally expressed on his show on ONUA TV this morning that he’s ready for them and will continue to speak truth to power no matter the ungodly things they do to him.

The police is yet to launch rigorous investigations into this attack on Captain Smart which he firmly believes is the handiwork of his enemies.