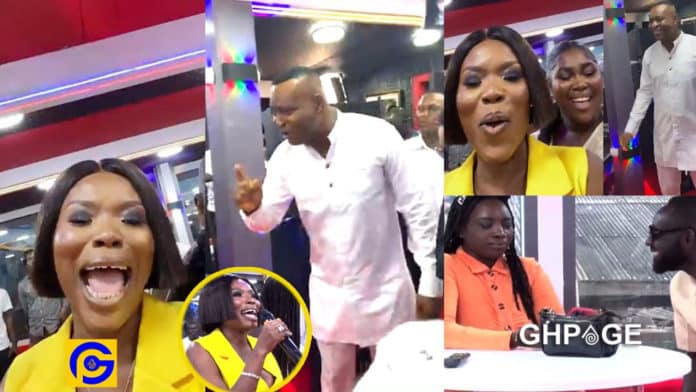 It’s a double celebration for Delay as her boss Chairman Wontumi has financed a second private party to mark her birthday.

The iconic TV and Radio personality, whose real name is Deloris Frimpong Manso, turned 40 on 24 June and shared stunning photos on social media to mark this milestone in her life.

She followed this up with an all-white private party at PotBelly Shack, which saw a surprise performance from her alleged young boyfriend Amerado.

It’s as though the birthday bash was not enough for Delay as another one has been held at the premises of Wontumi FM at Kokomlemle in Accra for the presenter.

The celebration came off on Friday, July 1, 2022, and videos that have popped up online show a lot of stars in attendance.

Among the many stars sighted at the party were Shatta Michy, Kwabena Kwabena, K.K. Fosu, AJ Poundz and many others.

Chairman Wontumi, who owns the media house, was also spotted at the birthday party.

The Ashanti Regional NPP Chairman, known in private life Mr Bernard Antwi Bosiako, who delivered a speech spoke highly of Delay and revealed why he chose her over the numerous astute female presenters including Afia Schwar to host Wontumi FM’s Drive Time Show.

He went on to throw indirect shades at critics that he sees those making noise on the internet that they are better than Delay as Bui Dam whiles Delay remains the almighty Akosombo Dam.