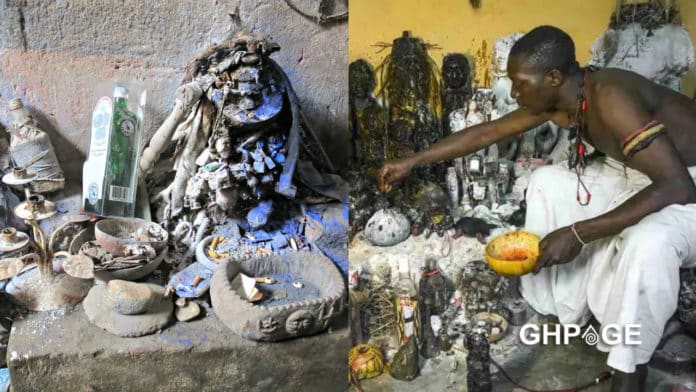 A self-acclaimed traditional spiritualist from Kulpeliga in the Talensi District of the Upper East Region has been sentenced to death after he gruesomely killed his wife and daughter for ritual purposes.

Mbawona Tindana was charged at the Bolgatanga High Court where he was found guilty of the crime, the Ghana News Agency (GNA) reports.

The convict was arrested in 2019 for allegedly killing his 25-year-old wife, Talata Abigail Kurug, and 2-year-old daughter, Nyapoka Mbawona Tindana, and sacrificing them to his gods.

Tindana had accused his wife and daughter of being witches. He beheaded the woman with an axe before doing the same to the child.

He was charged with two offences of murder under section 46 of the Criminal Offences Act of 1960, Act 29.

Judgment was handed down to the suspect after a unanimous decision from a seven-member jury Tindana himself selected, which found him guilty and sentenced him to death.

Read the state of the case below:

“The prosecution said on June 27, 2019, at about 1630 hours, deceased wife who had gone out of the house, was told by their son that the Tindan who is also the ‘Tindana’ for the area had killed his sister and sacrificed her to the gods.

“The prosecution said the deceased then rushed back to the house and saw the daughter lying dead, in a pool of blood with the brains scattered.

“The Prosecution said out of shock, the deceased collapsed and the accused pounced and hit her with an axe and a machete on the head, thereby killing her in addition to their daughter.

“He also hit his son with the matchet but the son managed to escape and was saved by young people who were playing football near their house and later took him to the hospital for treatment.

“The prosecution said an eyewitness who saw the action could not save them due to the axe and machete Tindana was holding, so she hid and later alerted the police who came and arrested the accused person.

“A police report said two deceased were found dead in a pool of blood and discovered an axe and a machete stained with blood lying on the ground beside the deceased.

“A medical report also indicated that the deceased was hit by strong objects causing serious head injuries that led to their death,” the GNA reports.