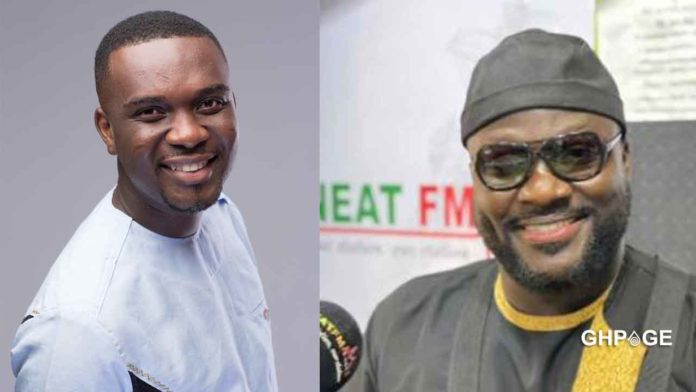 Popular Gospel musician Joe Mettle is in hot waters after U.S based Ghanaian gospel musician, Fletcher Narh on Neat FM exposed him of using his song without his approval.

The singer, speaking to Ola Michael on the popular radio station revealed Joe Mettle contacted him to ‘sample’ his song “Meyi Waye” which he was okay with.

Fletcher Narh stated he told Joe Mettle to hold on following his request to use part of his song whilst he prays about it. But the worst happened.

The musician revealed Joe Mettle had released the song without going through the necessary copyright process, also failing to give him credit.

“I sang Meyi W’aye about 15 years ago. I’m the only one that understands the history behind the song and how God gave the song. But you know how Ghanaians behave, people do not do the right thing.”

“He called me years ago and told me he had done all the research and he loves the song and that he wanted to do [sample] it. I said ‘that’s okay.

I have a lot of songs but we have to do it the right way’. He even wanted to know how much I was going to charge for it. I need to pray about it and all that but by the time I realised, he had released it,” he said.

According to U.S based gospel musician Fletcher Narh, he is excited that Joe Mettle sampled his song but he is not happy he didn’t give him credit for the song.

“I believe that the truth is the truth and nothing can outlive the truth. I was in America when people sent me videos and it was exciting but I feel that I deserved some credit,” he added.