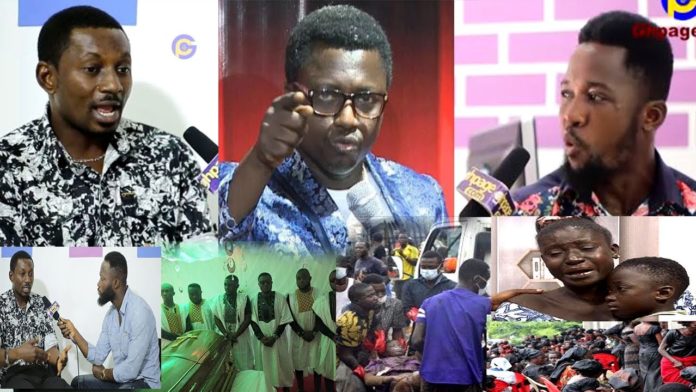 Popular radio and television broadcaster known as Goodman has exposed self-acclaimed former occult grandmaster Dominic Appiah over the death of his wives.

In an exclusive interview with GhPage TV, Goodman explained that Dominic Appiah contacted him explaining to him that he is no more into occultism and needs to world to know the truth.

According to Goodman, Dominic Appiah lied about the death of his wife explaining that he is a thief, liar, and criminal.

He added that everything Dominic said about being a former occult master is false adding that he believes Dominic is mentally retarded.

Goodman further explained that the woman Dominic claimed of being his wife is a girl she impregnated while she was 16 years and never took responsibility for the pregnancy.

The radio presenter also disclosed that the allegations leveled against Opambour by Dominic are false.

He explained that the reason why Opambour sacked Dominic was that he proposed marriage to almost all the ladies in the church and duped them huge sums of money.

The popular radio and television presenter added that he has a lot of evidence to show that he stole money or equipment at every church he was invited to give a speech.

The Kumasi-based presenter further stated that Ghanaians should discard everything Dominic said because he is a liar, fraudster and is mentally retarded.