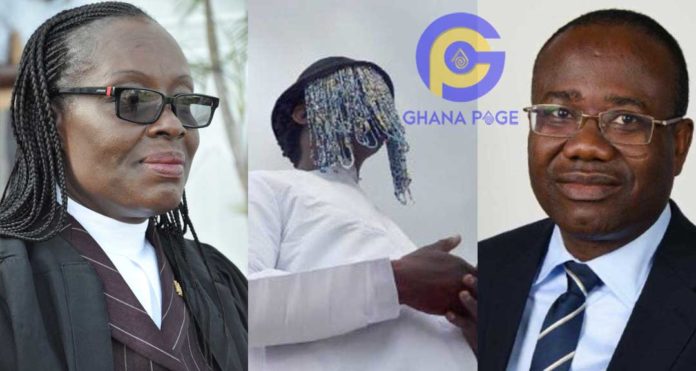 The office of the Attorney General has asked that investigative journalist Anas Aremeyaw Anas and his Tiger Eye PI team should provide all evidence against former GFA boss Kwesi Nyantakyi.

According to the Attorney General (AG), Gloria Akuffo her outfit is eager to prosecute Kwesi Nyantakyi and therefore needs Anas to provide all evidence that would help them to do that but her outfit is yet to receive such from Anas and his team.

Also Read: Anas not a true Muslim; he destroyed Nyantakyi who is a fellow Muslim – Irbard Ibrahim

“The Department can only make concrete moves when the required documents are provided and until that is done, there is not much that can be done,” she indicated.

Her comments are in reaction to claims that the government is dragging its feet and does not want to prosecute the embattled FA boss, Mr Kwesi Nyantakyi.

Mr Nyantakyi has been banned for life from all football-related activities and in addition, will pay 500,000 Swiss Francs (2,613,051.58) for breaching FIFA’s conflict of interest and other corruption rules.

The ban follows an undercover sting investigation by ace investigative journalist Anas Aremeyaw Anas. That investigation was shown in a documentary titled #Number 12 and it uncovered bribery and corruption related activities by referees, and other football administrators.

The former GFA president was caught in the video peddling influence and demanding from the supposed investor, who unknown to him was an undercover investigative journalist, an amount of money to settle Ghana’s president, vice and other ministers of state.

Mr Nyantakyi told the investigator an amount of $11 million will be enough to settle the most influential politicians in the country and facilitate his business activities. He also told the investor to pay him a percentage of the sponsorship sum that was to go into sponsoring the Ghana Premier League.

The documentary shocked the country. Anas later petitioned FIFA to take action against Mr Nyantakyi and also sent similar evidence to the Economic and Organised Crime Office in Ghana.

Also Read: Don’t allow Anas to use his ‘staged videos’ and ‘bogus petition’ to distract you – Irbard to Akufo-Addo

He also petitioned the Attorney General and other relevant bodies to investigate Mr Nyantakyi. However, close to a year after this, Ghanaians have complained about the AG’s sluggish attitude towards the case.

This prompted Anas to launch an online campaign – which has already received 3,808 signatures – to get the former GFA boss prosecuted. In a write-up to back his campaign, he expressed shock at the AG’s failure to take up the matter as it should despite the circumstantial evidence that led FIFA to ban Mr Nyantakyi.

Anas insists that Mr Nyantakyi must not be allowed to go scot-free and that “If Nyantakyi is not prosecuted, our collective fight against corruption will be meaningless. It will also send a signal to many citizens that the law only deals with the poor, but the rich and powerful cannot be held responsible for their actions.”

But, the AG says her office cannot be blamed for the slow pace of the case.

She said “we will see prosecution; we have made that decision. But, we need to have the full evidence and that may impact on what we have in draft now. I am surprised that the impression is being given that somewhat, we are not eager to prosecute. That, in fact, is unfair to this office.

“Particularly because we have been dealing directly with Anas and he knows the effort we have been putting in and what we are calling for and the fact that we have indicated what we need to enable us move on, which he has not supplied to us yet,” Ms Akuffo added.