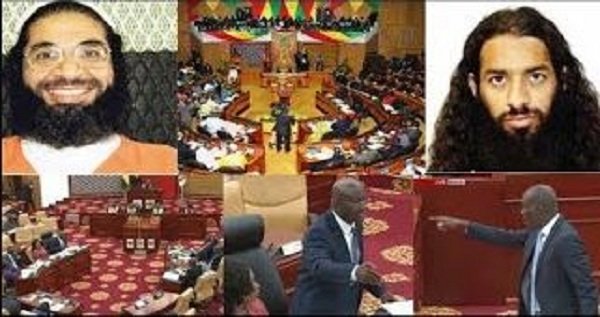 The government has said it is searching for a closed country that will be willing to accept and live with the two ex-Guantanamo Bay detainees.

According to the Minister for Information, Mustapha Hamid the two, residing in the country as refugees should also be willing to agree to be sent to such countries.

On  Joy Fm’s news analysis programme, Newsfile the minister said “We are exploring options to get friendly countries to take them. Per the agreement that was signed, when their two-year expire it the business of the country to find them a safe haven.That is why they were offered refugee status after the expiration of their period”

He continues to say that they will be kept in Ghana indicating that they conducted themselves very well contrary to any claims.

His observation reads “We will continue to keep them until such a time they find a country they are willing to go and the vice versa. They have conducted themselves well. They have been good. If they had not behaved well they would have been expelled”

The two Yemenis settled in Ghana in January 2016 following an agreement between the then President John Mahama administration and the then Barack Obama led-U.S.

Mahmud Umar Muhammad Bin Atef and Khalid Muhammad Salih Al-Dhuby, the two have been in Ghana for the last two years because of their refugee status.

Meanwhile, there have been calls for the two to be repatriated but Foreign Affairs Minister, Shirley Ayorkor Botchwey disclosed that government will, bring the agreement of their stay before parliament for ratification.

ALSO, READ: “I Have The Power To Destroy Ebony’s Career Whenever I Want” – Says Ebony’s Manager