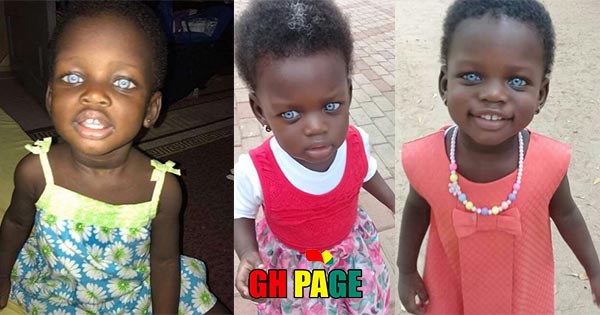 A Ghanaian girl born with blue eyes whose picture surfaced on the internet and identified as Chogtaa is 1year 9months old, from the Upper West Region. She was discovered by Afi Antonio, C.E.O. Sparklez Agency Founder Solar4Girls.

On her Instagram post, she throws more light on the condition of the little girl who is stigmatized because of her condition. Her condition barely known by her parents, relatives and the community as a whole is seen as a cursed child.

Others believe she is visually impaired and some health professionals her mom met gave weird explanations as having caused her daughter’s condition.

Unkown to her family and the society, her condition which is described as Waardenburg syndrome is a rare genetic disorder that often leads to hearing impairment, minor defects and pigmentation changes of hair, skin and eyes.

Read Also: 13 Celebrity deaths that broke the hearts of Ghanaians

Afi Antonio on her findings indicated that her condition is rare and occurs 1 in every 40,000 birth.

This is what she wrote about Chogtaa and her condition:

“Waardenburg syndrome is a group of genetic condition that can cause hearing loss and changes in colouring (pigmentation) of the hair, skin and eyes.
”
“Some persons in Chogtaa’s family think she is under a curse.”

“Her mum recounts some of the stories people say about her. “I remember a herbal Dr. told me once that if u have gonorrhoea while pregnant u give birth to such a child. She was actually telling the people seated at her clinic. I laughed and didn’t say anything.”

“One also asked if I was from a certain village in the Asante region because people from that village go to a certain river to ask for children and some of them give birth to such kids. I told the guy I didn’t know that village and that I was a northerner.”

“Others also think she is blind and can’t see and that they know the cause of her sickness and can show me what to do”. She attracts a lot of attention both negative and positive reasons but the negatives outweigh the positives. Some kids call her doll because of her eyes and she will normally shy away due to the attention.”

“Waardenburg syndrome is not a curse, there are thousands of people leaving with this condition all over the world. Let’s take some time to read about it and help educate other mothers and family who might not be aware of its existence. You can Google black kids with blue eyes. You will be amazed what you find.”

Read Also: 10 facts you didn’t know about Anas and no. 4 will shock you.