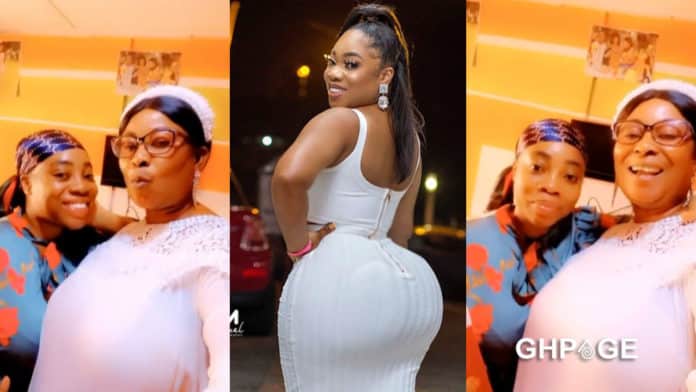 Indeed there’s power in the name of Jesus Christ. Though many have long doubted this assertion, Moesha Boduong’s recent massive transformation has made pessimists accept the fact.

Whoever thought that a big-time slay queen like Moesha could change and give her life to Christ in just a blink?

The initial stages of her repentance process wasn’t a good sight. She mostly appeared a bit sloppy, unlike the old self.

Weeks have gone by and the once viral socialite has appeared all glowing and very happy.

In a video shared on her official Instagram page, Moesha Boduong is captured in a selfie video with her spiritual mother, Prophetess Juliana.

Prophetess Juliana who was happy over the new looks of her ‘daughter’ in the video expressed her heartfelt gratitude to God for his care on Moesha amid trolls when she embarked on her Christan journey.

“By God’s grace and spiritual backing my daughter, Moesha is healed. Her friends and haters will see what God will do with her to the glory of his Kingdom”.

An excited Juliana asked Moesha to take a pin and shake her ‘goods’ for people to see that God has given her more buttocks after repentance.

“My daughter is still good-looking as you can see,” she said as Moesha wiggled her backside for the camera to capture her enviable curves and heavily endowed backside.