Video:’I owe Nana Addo No Apology and I will still follow Mahama even if he stays in opposition for 20 years’—Tracey Boakye 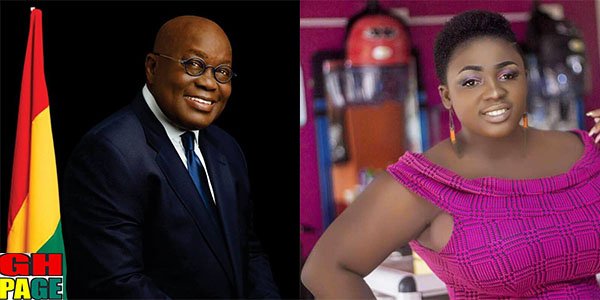 After Nana Addo Dankwa Akufo-Addo’s landslide victory in the 2016 elections, actress Tracey Boakye was reported to have been forced to eat humble pie.

The kumawood actress and producer according to reports apologized for her actions and said sorry for mocking and insulting the president.

In a sudden twist, the actress has said she never apologized to anyone including the president for her actions either prior or after the elections.

“I didn’t apologize to anyone because I didn’t do anything wrong to anyone.All that was written that I have to and I have apologized were false. I wanted to reply during that time but my fiance told me to stop.Apologize for what?”She said in an interview with Angel Tv on their program topic “celebrities and politics”

She added that even if the former president stays in opposition for 20 years, she will still follow him so why does she have to apologize.

” Even if John Mahama stays in opposition for 20 years, I will still follow him so why do I have to apologize?”She added

Speaking of the benefits she has derived from involving herself in politics she stated that she has gotten a lot of favors from places she least expected. Adding that, if she hadn’t endorsed Mahama and the NDC, she would have made a big mistake.

READ ALSO:Guru Narrates Why He Is Not Seen Walking With Lilwin Anymore

Below is her interview with Angel TV

The Kumawood actress campaigned vigorously for President Mahama and the NDC — insulted the NPP flagbearer several times, including calling him a “beggar”.