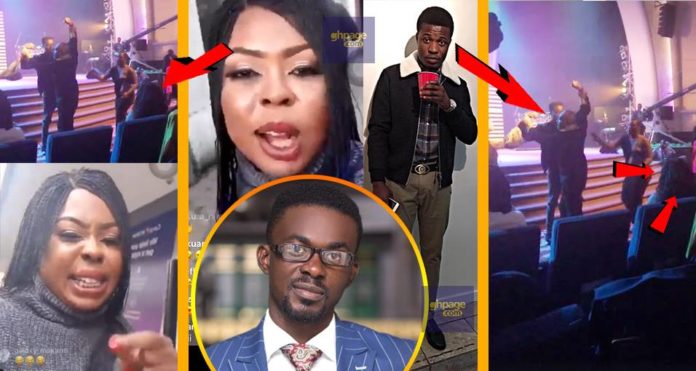 Valentina Agyeiwaa popularly known as Afia Schwarzenegger —predictably— has reacted to the story GHPAGE.com exclusively published this morning— which we indicated that some boys who are known to be ‘associated’ with Nana Appiah Mensah(NAM1) nearly beat her up at the just ended Ghana music awards in the UK.

The Ghana boys dancers led by one guy identified as KOD were performing at the event and it got to a point in their performance KOD made a shout out to Menzgold and their boss Nana Appiah Mensah.

That ‘bigging up’ seemingly didn’t go down well with Afia who in her reaction(video below) stated that KOD whiles mentioning NAM1’s name and chanting “Ghana must prosper” agenda was looking at her face.

Afia —in correspondence with KOD’s reaction after the incident – reacted with an ‘F’ word, accompanying that with a gesture with her hand.

That, as GHPAGE.com reported resulted in a scuffle after their performance.

In a lightning speed video exclusively gotten by GHPAGE.com saw KOD rushing towards where the comedienne was sitting who only had to be whisked away by the security before a punch could land.

As captured in the video, one could hear KOD fiercely saying to Afia “are you mad”,”are you mad” whiles she(Afia) looked on.

However, Afia in a reaction to all these— filmed herself whiles walking at the Oxford Circus throwing all manner of insults to KOD, NAM1 and even us who reported about the incident.

Afia Schwarzenegger claimed she is still rich despite NAM1’s inability to refund her mother’s 4 million Ghana cedis she invested in Menzgold.