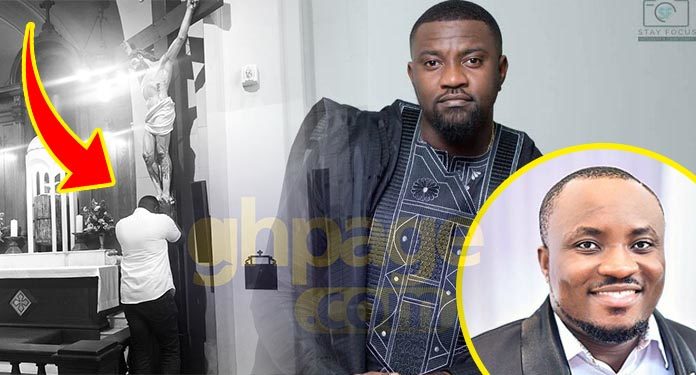 John Dumelo has been accused of being an idol worshipper on social media over a photo he recently posted of himself holding the feet of a statue of Jesus Christ in a church in Montreal where he is on holidays on Instagram with the caption:

read also: Don Little cries as he begs Funny Face to forgive him

The issue of idol worship was raised by comedian DKB who commented under his post, “2nd commandment: thou shall not bow to any graven image of anything in heaven, above the skies and below the earth” with another user

While many supported him with an ‘amen’ as a response, many of them accused him of being an ‘idol worshipper’

In response to all the criticisms in the heat of exchange of the argument, Dumelo clarified the issue with the same photo but this time with a different caption:

“I usually don’t respond to ‘negative ‘ comments on Instagram but these set of comments need clarification. I posted a picture of myself touching the feet of a statue Christ in a church in Montreal. Some people said it’s idol worshipping. Some said it’s blasphemy and others too said it’s occultism. If we all turn our bibles to Matthew 9:20–22, it’s talks about a woman touching the robe of Jesus to be healed. She said “ If I can just touch his robe, I will be healed”. That was her faith. And her faith healed her. When we go to certain churches these days, anointing oil, water etc are sold. Some are asked to pray over these and apply them to be healed. What about those that touch Tv’s to be healed? Is that idol worshipping? Is that occultism? No, it’s all in your faith. Faith is such a big influence if used correctly. I’m a proud catholic and I will never be ashamed of that. My catholic beliefs and principles have brought me this far and it’s taking me further. We all believe in one God. No need to judge. God bless us all.”