Audio: Justice Mmebusem reacts to Fake marriage allegations and Here’s Everything You Need To Know 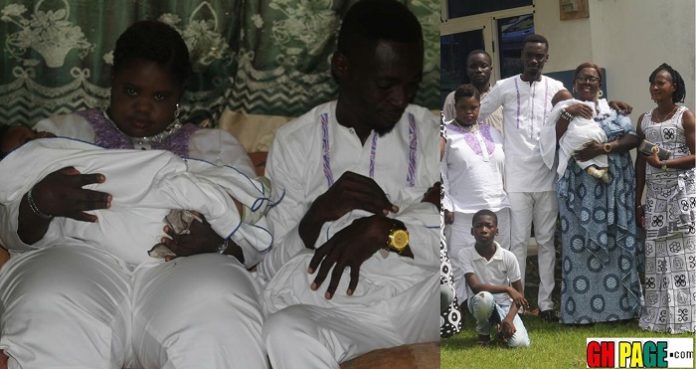 There were several allegations making rounds that Kumawood actor, Justice Mmebusem has thrown dust in the eyes of Ghanaians with his ‘fake marriage’ and the supposed birth of twins with Madam Abena Boatemaa.

The doubters stated further that, the actor was actually trying to hype his upcoming movie and had to create something to get the attention of Ghanaians and movie enthusiasts.

Furthermore, they backed their claims by taking a critical look at one of the photos Mmebusem shared after the naming ceremonies of his twins.

In the photo, they questioned the rapid rate at which the twins were growing which according to them is beyond the ordinary.

They also questioned, the difference in the complexion of the twins— Which is quite hilarious tho, because some twins are Fraternal.That is twins who do not resemble in anyway—Either in looks, complexion, height or anything at all.

However, Mmebusem in reaction to these allegations stated that the doubters’ claims cannot be substantiated in any way.

“Even if it is for a movie as they claim, is it a news.?If it’s a movie, there will be a director, soundman and characters will be there.There will also be people walking around the scene so it is not even a news.” He stated

He also explained why he is not wearing a ring as many expected him to do as a married man. All in the audio below;

Mmebusem on this same issue threw some jabs towards Kwadwo Nkansah and his crew..Watch that video below;