Kelvyn Boy replies Stonebwoy for dissing him at 4Syte Awards 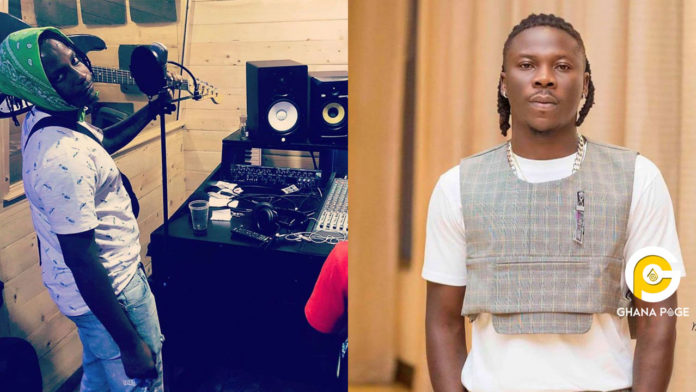 Kelvyn Boy has hit back at his former boss, Stonebwoy for describing him as an underground artist who does not respect.

In a swift response to Stonebwoy’s jabs at the 4Syte TV music video awards held on Saturday, 16th November 2019 Kelvyn Boy said Stonebowy is only acting out of pain.

SEE HERE: You don’t respect-Stonebwoy throws another jab at Kelvyn Boy on stage at the 4Syte Music Video Awards 2019 (Video)

He further described Stonebwoy as a fanfooler meaning some who delights in taking his fans for a ride when he is obviously wrong.

Lol, You Dey Call Me Underground Out Of Pain. You See Underground Wey Dey Play Shows Every Weekend Before…Fanfoolers Zalaaa

SEE ALSO: Stunning photos of Shatta Wale’s daughter, Ohemaa who is based in London

Reacting to Stonebwoy’s claim that it will take 40 years to get another Stonebwoy, Shatta Wale and Sarkodie, Kelvyn Boy wandered by Stonebwoy always has to put some down and paint them black in the eyes of people.

Stonebwoy whiles performing arts the 4syte Tv awards threw wild jabs at Kelvin Boy describing him as an underground artist who does not respect.

Stonebwoy said: “Big up to Samini, my godfather, and the upcoming wey dem no dey respect, dem for sit well.”

He also urged Ghanaians to protect him, Shatta Wale and Sarkodie because they are national assets and it will take 40 years to get their kind

“It Will Take Another 40 Years To Find Me, Sarkodie And Shatta In This Industry”- Stonebwoy Bragged