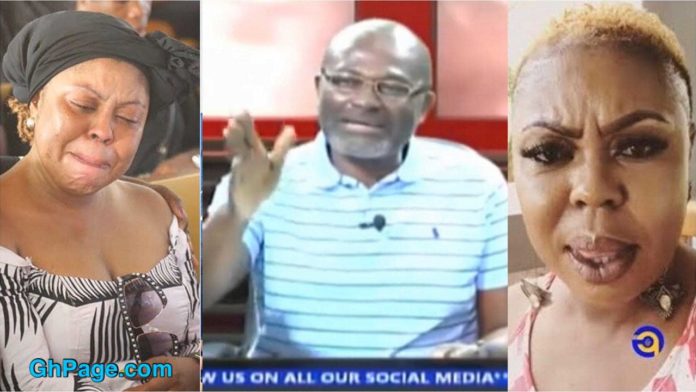 Controversial member of parliament for Assin Central, Kennedy Ohene Agyapong has rained insults on Afia Schwarzenegger for claiming he ordered soldiers to arrest her.

Kennedy Agyapong who sounded very angry described the self-acclaimed queen of comedy as an ugly bitch and a baby goat (kid).

According to Kennedy Agyapong, Afia Schwarzenegger only wants to be relevant which is why she is accusing him falsely.

The member of parliament explained that he has been out of town for some days now and knows nothing about soldiers attacking Afia Schwarzenegger on his orders.

Kennedy Agyapong further stated that he is ready to rekindle their war if Afia Schwarzenegger dares him and will not spare her this time around.

“The girl wants to be relevant, an ugly bitch like that such wants to be in the news. If she wants to start the war again, she can go ahead. If she dares me, I will insult her.

Afia Schwarzenegger is one of God’s ugliest creatures. You don’t even exist in my thinking because you are not a human being and you are a low class”, Kennedy Agyapong angrily stated.

This comes after Afia Schwarzenegger originally known as Valentina Nana Agyeiwaa accused Kennedy Agyapong of masterminding an attack on her by soldiers.

According to Afia Schwarzenegger, her producer was also assaulted and is currently on admission at the hospital.