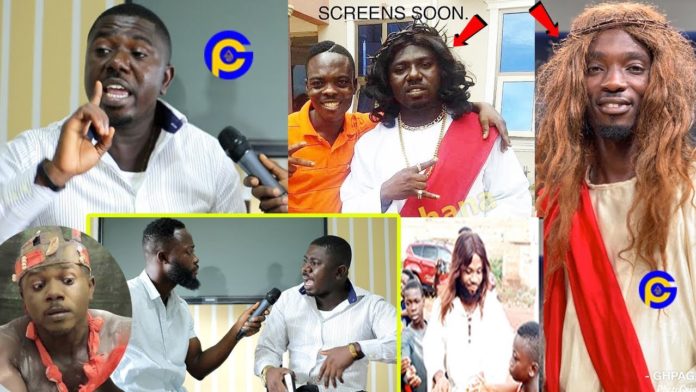 According to Komfo Kolege, he is not in any way imitating Mmebusem ‘Ghana Jesus’ adding that it was just an advertisement he shot for a roofing company.

In an exclusive interview with GhPage TV, the comic actor debunked rumors that he is shooting a new movie or skits with the ‘Guy Jesus’ idea.

He added that he was one of the few people that contacted Mmebusem to congratulate him when he started the ‘Ghana Jesus’ initiative.

Komfo Kolege further stated that he has no intention of competing or copying Mmebusem but was just an advertisement he shot.

He explained that when he received the script, he suggested that Mmebusem will be the right person but they insisted that he (Komfo Kolege) shoots that scene.

Komfo Kolege also added that he has no problem or issue with Mmebusem and that they are in contact and have a very good relationship.

He also disclosed that he has a project with Mmebusem which Ghanaians will love and he is not in competition with anyone.

The comic actor further stated that his aim is only to entertain Ghanaians but not to imitate Mmebusem.