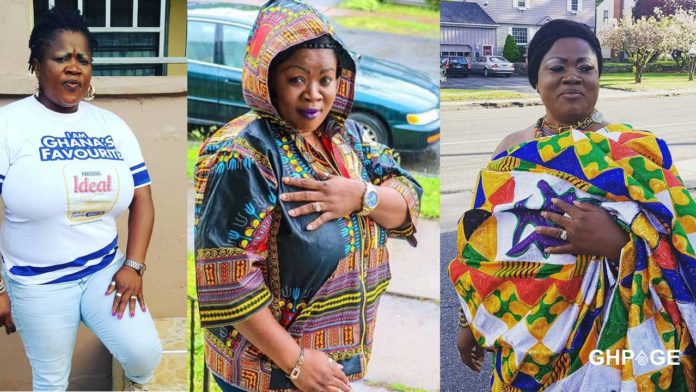 Popular Kumawood actress Mercy Asiedu has become the latest celebrity to be trolled by some social media users for repeating dress.

In the first photo, she was attending an interview on UTV recently; and in the other one, she was starring in a movie.

According to some who commented on the post, the movie was shot about four years ago which is a long time, therefore, it was bad for her to have repeated it.

Others argued that there was completely nothing wrong with repeating clothes.

ako_tumtum: “One is silver in color and the other gold…what is wrong if she repeats clothes?.”

akosuah_darkoa: “Wow 2017 movie…she can really keep stuffs .i love that.”

cordovogh: “It’s no big deal please, when the dress is expensive you don’t expect someone to wear it once all because of celebrity ??.”

kojo_blake: “Has it faded anaa.”

hawabarakat: “Omg But it true .”

lanalikins: “I even said it,why about 4 years ago dress,why cant u wear something different, and de funny part in de movie was dis dressing.”

edn_aa: “I thought I was the only one who recognized it.”

maa_abena_nhyira: “It means the dress is for her… it wasn’t mokwaa.”