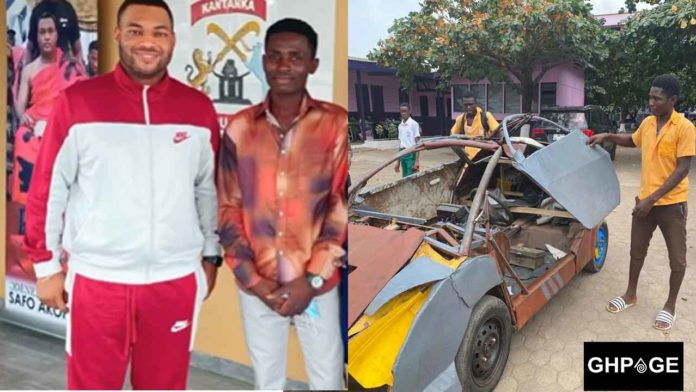 Kwadwo Safo Jnr. who was so elated to meet young Kelvin promised to sponsor his education by bearing the cost of his Senior High School education.

In a video sighted by GhPage, Kwadwo Safo also pledged to help and mentor Kelvin Odartey to achieve his aspirations in life and to also build more cars.

The Chief Executive Officer further commended the Junior High School graduate for his innovation adding that his father wasn’t even his (Kelvin) age when he started his works.

This comes after the 2020 BECE graduate of Cosmos International School amazingly built a ‘Lamborghini’ car using scrap metals and wood.

The young talent drove his self-made car to the examination hall to write his final paper which went viral.

According to Kelvin, it took him three years to complete his invention as he was juggling school work with building his car.

He also stated that he was able to complete his work with the help of his seven friends who were also his financiers and apprentices.