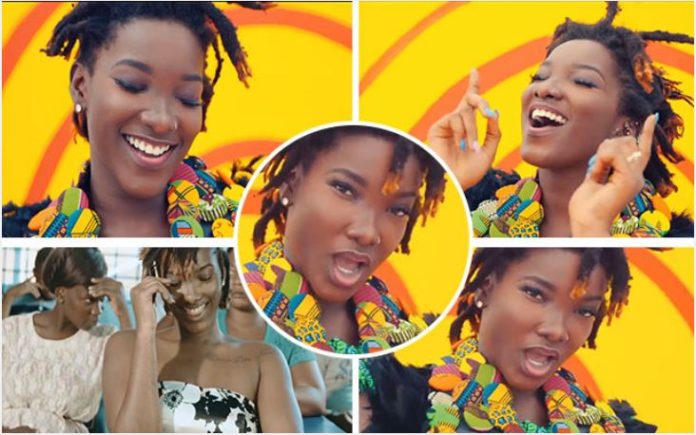 The morning show host of Accra based Rainbow Radio, Prince Kwame Tutu has lashed out at sensational singer Ebony Reigns for her choices of dressing.

Ebony has been largely criticized for indecently dressing whenever she mounts the platform to perform and whenever she is seen in public.

Recently, she was almost nakked when she was on the Red Carpet at the 4Syte Tv music video awards.

When she mounted the stage to perform, it was worse. It appears she had no underwear. Showing everything to the curious eyes.

Many have criticized her for these indecent dressings. Latest to add his voice to the calls for the 20-year-old musician to put a halt to her negative brand is Kwame Tutu, the frontline host on Rainbow Radio.

According to Kwame Tutu, Ebony lacks proper upbringing and self-respect. He further accused Ebony of using her little fame to corrupt young girls. Speaking to Ghpage.com, the seasoned presenter said:

“Ebony must be called to order. She must not use her little fame to disgrace womanhood. I have for some time now come across photographs and videos of the female Ghanaian musician – Ebony exposing her private parts all in the name of she being a musician.”

“I love it when young people put their God-given talents to work. Therefore I have been impressed about the little girl’s effort. However, I think she lacks self-respect, proper upbringing, training, and virtues as a grown woman.”

“Ebony must be told that God is wise in hiding our s3xual organs where they are. It was to be kept secret. God made women extra special, so any depraved mind that tries to denigrate womanhood must be called to order.”

“Ebony should know and note that before her there were better female musicians, beautiful ones who sang better songs and they rose to fame without selling womanhood cheaply.”

“I am surprised the Ghana police service has overlooked the girl’s activities as the 1960 criminal code frowns on her indecent exposures. Its an offense to expose ones s3xual organs, the police must arrest her and make her face the law.”

“This society should know that whether we like it or not young children will learn from people with bad characters such as Ebony hence we must all condemn her indecent exposures.”

“Event organizers must blacklist her or warn her of such things if contracted to perform. Ghana is not Garden of Eden, if Ebony wants to go nakked, she should go look for Eden and stay there,” The ace journalist added.

SEE ALSO: Meet The 5 Socialites In Africa who are making huge money with nothing but their big B00TY [Photos]