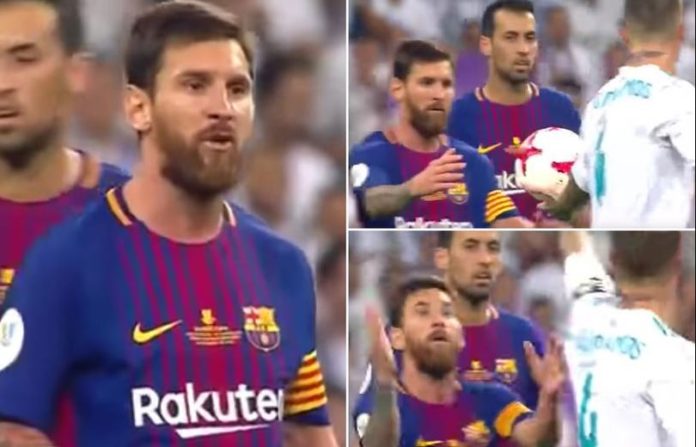 Real Madrid delivered another sensational display to see off Barcelona and win Super Cup, the 10th in the club’s history.

Marco Asensio, who also struck a spectacular goal in the first leg, pulled off the same trick after just four minutes with a long-range curler that shook Barcelona, who never seemed to recover.

Karim Benzema doubled Madrid’s lead when he capitalized on slack defending to fire home from Marcelo’s low cross, while Lucas Vazquez hit the post for Madrid.

At one point, Messi tried to get the ball off of Ramos to take a quick free-kick. The defender looked as though he was going to hand the Argentine the ball but, at the last moment, threw it over his head instead.

READ ALSO:Photos: Cristiano Ronaldo Finally Shows Off His Twin Boys – They Are Adorable

Lionel Messi’s chip hit the bar as Barcelona tried to respond and Suarez headed against the post, but it was too little, too late for the Catalans.

It meant Barcelona failed to score in El Clasico for the first time in 25 editions of the famous fixture.

Ghanaian International midfielder Thomas Partey has been named the Atletico Madrid player for the month of March 2019. The 25-year-old was awarded the best player...
Read more