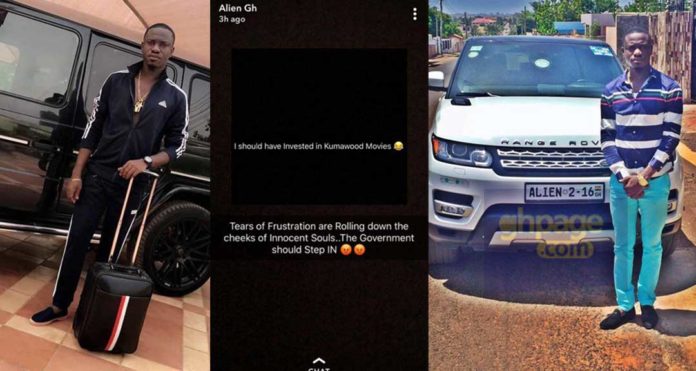 One of the richest young men in Ghana who goes by the name Alien has joined the list of popular men who have bemoaned the loss of their huge sums of money to the embattled Gold trading and investment firm, MenzGold Ghana Limited.

In a series of posts on his Snapcaht handle, Alien has just revealed he has GH¢2 million locked up at Menzgold and he is pleading with the government of Ghana to stop shielding the CEO of the company, Nana Appiah Mensah and get them their money.

Alien explained that he would have been better off he had invested the 20 billion old Cedis in Kumawood movie production than investing with Menzgold.

Some of his Snapchat posts reads:

“So my 2 million ghs gone just like that? I should have invested in Kumawood movies.”

“I regret the day I invested GH? 2 million in Menzgold and not in Kumawood movies, I would have benefited a lot if I had invested in movies,”

“How can the government be protecting him and his assets to frustrate his clients of entry to demand their money,” Alien cried.

The rich young man, Alien owns a real estate company, AL Properties and he is regarded as one of the top ten richest young men in Ghana. He has vowed to sue Nana Appiah Mensah and Menzgold to retrieve his money.

In the meantime, Nana Appiah Mensah yesterday ordered the entire staff of Menzgold to proceed on compulsory leave starting on 10th December 2018.

SEE HERE: “Thank you for your unmatched sacrifices” – NAM1 tells the entire Menzgold staff as he asks them to proceed on compulsory leave