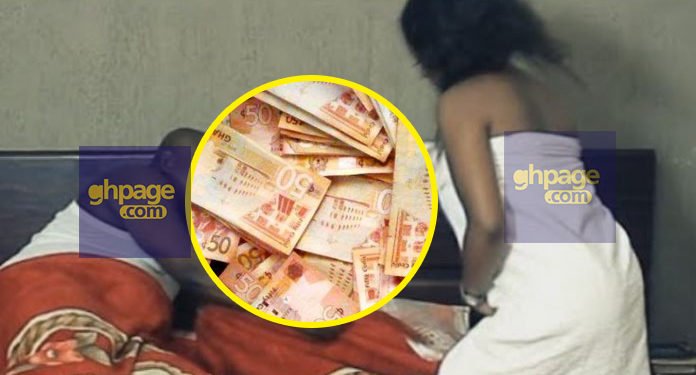 A married man has shared her story of how she used to sleep with older men when her then-boyfriend was in school so they could afford his fees since both his parents had died.

When some girls in universities are to narrate what they go through before their final day on campus, it would be enough to write a novel.

Some get comfortable dating sugar daddies to support their education but remember it comes with a prize in the near future.

A lady sleeping with a sugar daddy is to help them make ends meet because they probably aren’t making enough and they feel without a man to support them life isn’t that easy to navigate.

According to the married woman in an inbox message to David Papa Bondze-Mbir on Facebook, during their university days, she agreed with her then boyfriend now husband to be going out with married men for money just to help the husband graduate from the University.

But after being married for a decade with three (3), the husband of this married woman wants her to be sleeping with a wealthy client of his because he (husband) is jobless and not financially sound.

Read the full story below…

read this: Wendy Shay shows off her boyfriend after rumours of dating Ebony boyfriend

“My husband was my childhood best friend. We grew up in the same neighborhood, attended the same junior and Senior High Schools. I am tempted to believe – he’s the only one who truly knows all about me and loves me anyways. We both come from an average family background, and we’ve been there for one another, over the years.

When he asked me to be his girlfriend, we were both pursuing our University degrees. It did not take me a second – to say, “Yes!” There was absolutely nothing to think over. I loved him that much: I still do.

In our third year at the University, his father died. His dad worked with a security agency, and was taking loans upon loans to finance his education. My parents are both teachers, so you can imagine how I was also surviving, being a campus student.

So, it was in one of those difficult semesters, that a married man showed interest in me. I discuss everything with my husband, even when he was just a boyfriend; so we assessed the entire situation, and came to a conclusion, that I would ‘play’ along, get as much financial assistance from him as possible, and then, break things off.
Things were going on fine until the married man ‘fell’ in love with me, and wanted to rent an apartment for him and I to be staying in. His wife lived and worked in a different region – with their kids. He usually visited his family on weekends and on holidays, so it wasn’t so much of a problem for him.

I ended things because my boyfriend wasn’t in favor of the idea. In our final year on campus, we needed money to enable us pass through the last semester, so we agreed I found another married man – to be spending on me.

We both graduated and found really good jobs, and then, got married. Life was finally good for us. However, before marriage, we both agreed on putting an end to the affairs, because we were financially independent. We have Three (3) kids now, and have been married for 10 years.

My husband lost his job in February, 2017, and he’s been home since. I am helping out with the home (financially) and I feel, we aren’t really that much in need of money. However, my husband wants to revive a past we had both agreed on putting an end to. He’s suggesting I consider dating a client of his at work, who is wealthy. I objected to this, and he is taking offense. He claims I am not earning enough to sustain the family, and his numerous attempts to secure a job are all turning futile.

He is indirectly now cautioning me to either make up my mind or he considers dating Sugar-Mummies for the same cause, to support the home. I love my husband, and I can understand his frustrations, however, we really are not starving. We are still okay financially.

He has access to my accounts and savings. Why would he still want me to sleep around with other men, especially now that we are both parents and role models to our kids? I am the type that would want to do any and everything just to please my man, and also make him happy. I don’t know what decision to make right now.”

read more: Headmaster in “Kitchen stool” sextape admits having sex with his student