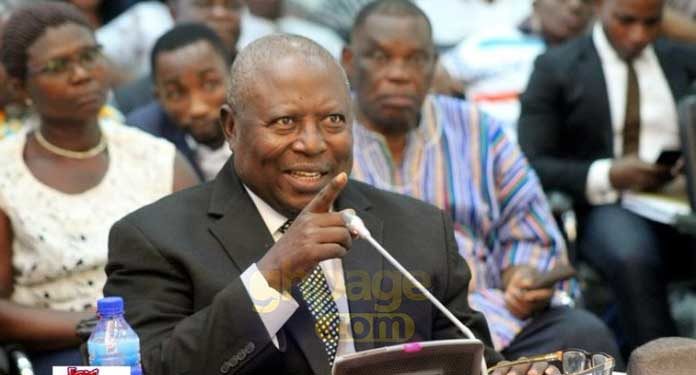 A staff at the Office of the Special Prosecutor has been suspended for leaking confidential information and documents to unauthorized persons.

Disciplinary action was taken against Detective Inspector Yaa Boakyewaa who was assigned to the Special Prosecutor’s office for exhibiting gross insubordination and impudence in his presence when she was marched to his office to sign a letter of receipt of her suspension letter.

According to the Special Prosecutor Martin Amidu, he has handed her an indefinite suspension and demanded the Inspector General of Police, David Asante-Apeatu to remove her from his office.

Amidu in a letter said the officer in question “continued rudely and very insubordinately and had the impudence to tell me in the presence of the Deputy Special Prosecutor, the Secretary to the Office, the acting Head of the Investigations Division, and a senior officer of the Bureau of National Investigations (BNI) that I had no right to address her as a Sergeant when she had been promoted to an Inspector.”

Last week, it has been revealed that 25 cases are currently at the office of the Special Prosecutor.

This list even though a lot have cast doubt on it, Martin Amidu indicated in a document submitted to the IGP over the incident said the list was fake and a creation by Detective Inspector Yaa Boakyewaa.

Amidu’s letter to Sgt. Yaa Boakyewaa requested her to explain why she shouldn’t be reprimanded for her conduct and added: “none of the files in the memorandum were petitions submitted to this Office as you falsely and maliciously presented them to be.”

The cop with the Criminal Investigation Department (CID), Martin Amidu explained is morally unfit to be in his office.

The letter addressed to the IGP was also copied to President Nana Addo Dankwa Akufo-Addo, the Interior Minister, Chief of Staff, Deputy Chief of Staff (Operations) and the Secretary of the Office of the Special Prosecutor revealed, that he had discovered that the officer had in the past been involved in a sex tape controversy.

that did not make her a fit and proper person of integrity and morality to have been seconded to this Office whose mandate requires that exhibition of the highest degree of morality, integrity and honour,” he noted.

Meanwhile, the Bureau of National Investigation (BNI) has arrested Detective Inspector Yaa Boakyewaa after Martin Amidu lodged an official complaint against her.