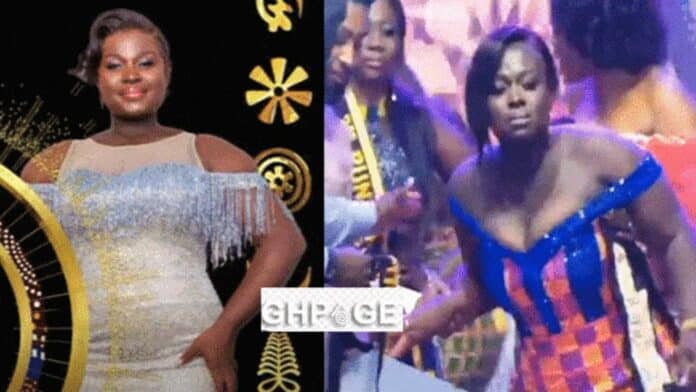 Obroni, the contestant who got shocked, felt dizzy and collapsed at the grand finale of Miss Golden Stool after the host of the show Tima KunKum called out AbrewaNana instead of her.

The video of the moment she collapsed went viral. The beautiful lady who had given and taken her all into the competition couldn’t stand on her feet after the winner’s name was said by the MC.

The conversation surrounding her collapse hints that she gave herself to the management of the beauty pageant to win the contest. Another rumour that has spread is that Obroni bribed the organizers to win but it took another turn.

And because she was not given what she expected she collapsed on stage. Obroni couldn’t stand the disappointment, rumours states. Well, from the horse’s own mouth she has come to clear the air.

Speaking in an interview after the incident, Obroni (the 1st runner-up Miss Golden Stool 2022) debunked the rumour that she had offered herself to some of the management of the pageant to win.

She, therefore, gave the reason she went off on stage at the Grand Finale last Sunday. According to Obroni, she had not eaten and thus was hungry at the time the program started to end bit.

WATCH THE VIDEO; SHE SAID MORE IN THERE