When The Brainless Is Hyped, Shame Becomes Our Friend – The Case Of Moesha Boduong On CNN 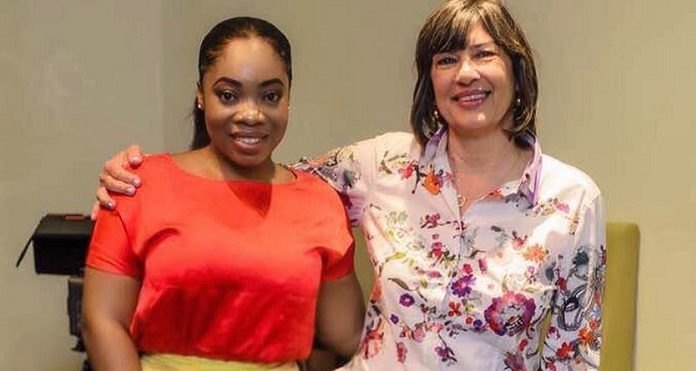 The most trending issue on social media in Ghana is the just-published interview Moesha Babiinoti Boduong had with CNN’s Christiane Amanpour on “S£x and Love Around The World”. Moesha Boduong claims she is an actress and a photo model except we have no idea the title of the movies she has acted in but we are aware she an Instagram nude model.

Mainly Moesha Boduong shot to fame on the back of Nu-dity and Ghanaian bloggers were the main champions of her nu-de game and Slay Queen ambitions. Well, after all the hype Moesha Boduong with just 2 minutes has not only glorify “Prostitution” in Ghana she has equally rubbished the hard work of Ghanaian women.

People ask why Bloggers despite all the numerous topics never fail to write and project Moesha’s nu-dity on a daily basis, well, there is a selfish reason behind it. Moesha is a traffic cow. In 2017, besides Ebony Reigns, she was the second most traffic generating ‘celebrity’ in Ghana. Why won’t they write about her? And that is why we are where we are with her interview today.

During the interview dubbed ” When Being A Mistress Is A Financial Decision”. Moesha made it clear that Ghanaian women have soo many needs they can never fulfill it except a man provides. And It doesn’t matter if the man is married or not.

“In Ghana, our economy is in such a way that you need someone to just take care of you [because] you can’t make enough money as a woman here.Even when you want to get an apartment, you have to pay for two years advance and I just started working so where am I going to get that money to pay for an apartment for two years,” she said.

“He takes care of me, my financial stuff, my apartment, my car, my rent – everything.”

It’s pathetic that the Slay Queen will generalize her glorification of prostitution on a network as huge as the CNN. She is of age and she can choose to do what she wants with her life but to generalize it is as insane it sounds.

Is Moesha saying my auntie in Duayaw-Nkwanta in the Brong Ahafo Region who sells charcoal whiles fetching water for contractors to build a house, just to take care of her kid whose father is dead is one of those “Women”?

Or is she saying the over 60% women in the informal sector ( Not to talk of the 30% in the formal sector) of the economy doing all their best to sustain the economy is just like her and go about prostituting after married men?

But I don’t blame her. When you lack talent, education, certificate, skill, training and more importantly Brains but blessed with only a sexy body (Which We Doubt It’s Even Natural), what choice do you have??

And I don’t blame her because when the media especially bloggers decide to hyped the brainless over the talented and hard-working women in the country, shame and disaster are bound to happen.

And Again I don’t blame Moesha Boduong if CNN and Christiane Amanpour could not get hold of any of the hard-working young women to chat with on “Sex and Love Around The World” but rather settle for this brainless girl, then she probably had her own agenda.

I have a strong feeling the interview between Moesha and Christiane was more than the 1 minute 50 seconds published. It’s probably around 30 minutes and the CNN team had to edit to get the less than 2 minutes statement that makes little sense.