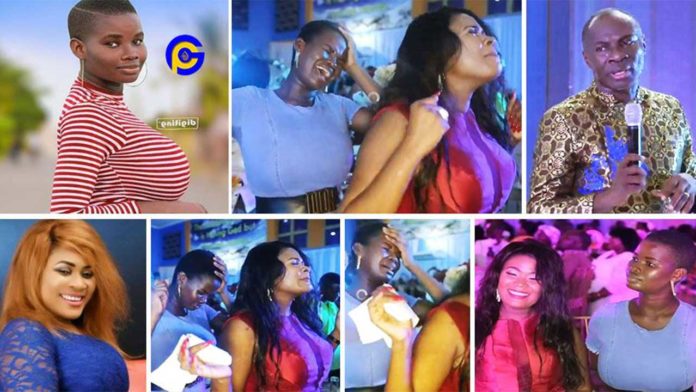 Kumawood actress Nayas Boaku and video vixen Pamela Odame Watara at a point were really in the spirit at the birthday festival of Prophet Badu Kobi which happened at his church in Accra yesterday.

In a video GHPAGE.com has sighted, Prophet Badu Kobi who is widely known as the prosperity preacher and also happens to be the birthday man, in an offering sermon blessed members at the party to prosper — and spotted in the congregants were actress Nayas and now her close pal Pamela Watara.

The two actresses are known for their controversial activities in the public space and to spot them in that manner resulted in shocking moments across some online platform.

The founder and leader of the Glorious Wave Church, Prophet Emmanuel Badu Kobi, yesterday, Friday 3rd May 2019, celebrated his birthday in Accra.

The party, which was dubbed “Birthday Festival”, was attended by colleague pastors, celebrities, friends, church members and other well-wishers.

READ ALSO: Top 3 Ghanaian musicians who may have slept with Pamela Odame

Politicians such as Julius Debrah, a former chief of staff to former president John Mahama and Hon Eric Opoku who was a former minister; Hon Ken Agyei who was also the former deputy minister of Energy also attended to celebrate with the popular prophet.