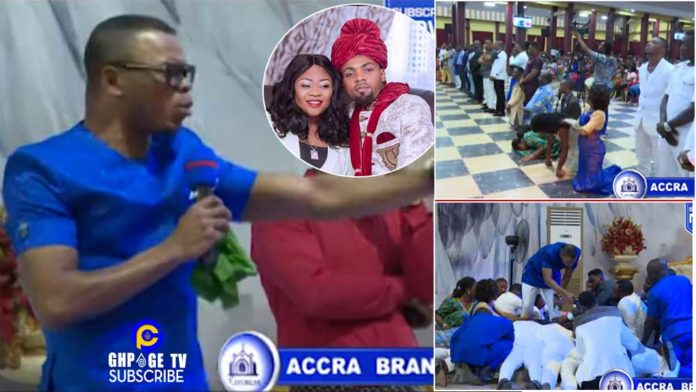 Controversial man of God, Daniel Obinim after arriving from Spain has caused another stir in his church in reaction to One Blow’s recent interview he did to reveal what he went through before parting ways with Obinim.

In the video GHPAGE.com saw, Obinim told all his pastors to line up in front of the congregation.

After the pastors introducing themselves and the branches they head, he announced to them that—in his state of confusion—he cannot work with them anymore.

According to Obinim, not even one of the pastor’s line-up in front of him were pastoring at a different church before joining him.

Before that, Obinim gave a brief background of some of the pastors, notably mentioning Solomon who is the Tema resident pastor.

He disclosed that Solo was a poultry farmer who came to him (Obinim) with his problem and he turned him a pastor.

Pastor Eric and Kofi, Obinim stated they were mechanic and a truck driver respectively before they joined him as pastors.

This comes after one of his Ex pastors,Baah aka One blow came out to spill out the beans by revealing some of the bad things he went through when pastoring at Obinim’s Accra Branch church.

Pastor Baah narrated how Obinim’s wife, Florence Obinim plotted with some people to disgrace his wife in front of the whole congregation which nearly made her lost her mind.

According to Prophet One Blow, his wife was mentally affected by the accusation which was spearheaded by Florence, the wife of Bishop Obinim.

One Blow also disclosed it was a plot by some members of the church to disgrace him and his wife to force them to leave the church which he eventually did.

All these problems emanated after the head pastor of Anointed Palace Church (APC) Rev Obofour gave out a Range Rover Evoque, a plot of land at Atomic Junction and an amount of 5000 cedis to Obinim’s junior pastor.

Bishop Obinim felt betrayed over this kind gesture by Rev Obofour as it is a known fact that the two men of God are ‘rivals’.