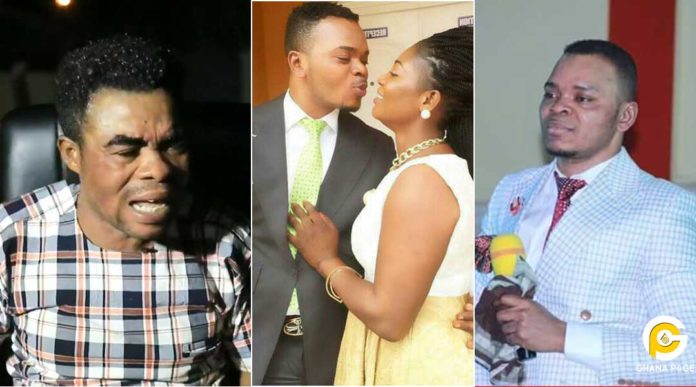 The former junior pastor of Bishop Obinim known as Prophet One Blow has revealed in an interview that his wife almost went insane after she was wrongly accused and disgraced in front of the congregation.

According to Prophet One Blow, his wife was mentally affected by the accusation which was spearheaded by Florence, the wife of Bishop Obinim.

One Blow also disclosed it was a plot by some members of the church to disgrace him and his wife to force them to leave the church which he eventually did.

“My wife was mentally affected after this incident happened. She actually ran naked out of the house, it was my landlord who caught her, put her in a taxi and brought her to me in church. She was saved by God.

No one knows about this and a week after this incident the truth was revealed but the harm has already been caused.

We had always wanted to leave the church so I was really happy when I received the prophecy about me setting up my own church”, Prophet One Blow disclosed.

One Blow also revealed that it was Florence Obinim, the wife of Bishop Obinim who was behind all these false accusations.

He added that Florence Obinim was the main reason why he wanted to leave the church because he was fed up with the accusations.

This revelation comes after the head pastor of Anointed Palace Church (APC) Rev Obofour gave out a Range Rover Evoque, a plot of land at Atomic Junction and an amount of 5000 cedis to Obinim’s junior pastor.

Bishop Obinim felt betrayed over this kind gesture by Rev Obofour as it is a known fact that the two men of God are ‘rivals’.

However, Prophet One Blow rendered an unqualified apology to his spiritual father for receiving gifts from Rev Obofour.