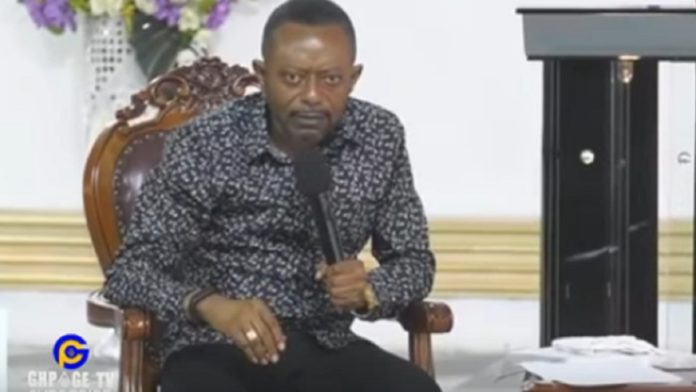 The General Overseer of Glorious Word Power Ministry International, Rev Isaac Owusu Bempah has lashed out at Evangelist Akwasi Awuah for saying all prophets in Ghana are fake.

Rev Isaac Owusu Bempah stated that if Evangelist Awuah has any proof that he is a fake man of God, he should expose him.

According to Owusu Bempah, Evangelist Akwasi Awuah erred in generalizing his comments about fake men of God.

Owusu Bempah further explained that he didn’t visit the Chief Imam to apologize over the death prophecy he made but to appreciate his efforts for calling his boys to order after they vandalized his church properties.

The man of God added that after some Muslim youth destroyed his properties, the Chief Imam sent his representatives to Owusu Bempah to apologize to him and explain that he had no hand in it.

He added that he will never apologize for any prophecy he makes because it was revealed to him by God.

The man of God also dared any fetish priest or pastor who claims he has seen him (Owusu Bempah) at a shrine for spiritual powers to come out and expose him.

Rev Owusu Bempah stated that Akwasi Awuah is a disrespectful evangelist who has even rained insults on the Asantehene, Otumfuo Nana Osei Tutu II and Archbishop Nicholas Duncan Williams.

He also revealed that Evangelist Akwasi Awuah failed to visit his church member who was diagnosed with breast cancer and later passed away.

According to the man of God, he knows lots of secrets about Evangelist Akwasi Awuah and will expose him soon.