Countryman Songo and Akrobeto Celebrate His Return To Adom Tv 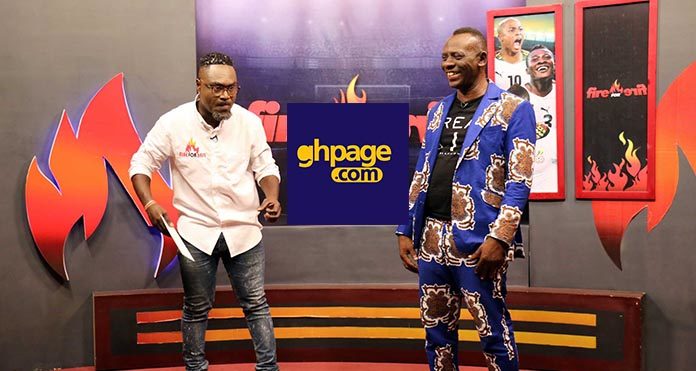 Controversial Sports journalist, Patrick Osei Agyemang, popularly known as Countryman Songo is back on the screens after a four-month suspension.

Songo, who is the host of the popular TV show ‘Fire for Fire’ on Adom TV was away for four months after now-former Ghana Football Association president Kwesi Nyantakyi brought a $2million legal suit against him for defamation.

After several weeks, On Monday, June 18th, the tough-talking journalist appeared on the screen wearing a white top.

Prior to the show, a white powder was poured on Songo, which signifies that he has won the battle against embattled Kwesi Nyantakyi where he granted an interview and assured his fans and football lovers to expect more fire as he used to do.

And to our surprise on his return, he was joined by popular Kumawood actor Akrobeto where the two danced to musical tunes as the show progressed.

The anti-corruption campaigner is expected to continue with his fearless and courageous style of speaking against the rot in the system with no fear of reprehension.