Photos from the NDCs ‘March for Justice’ protest 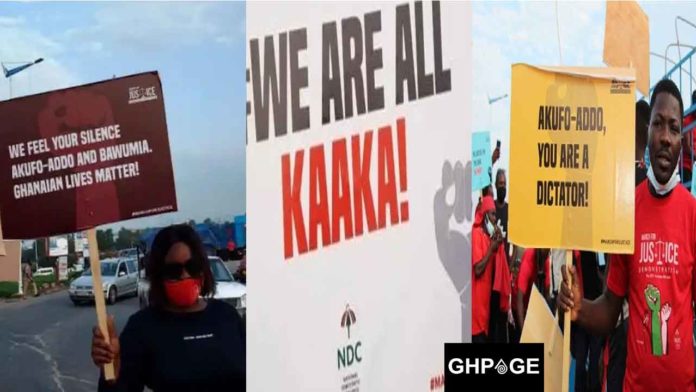 Members and supporters of the opposition National Democratic Congress (NDC) embarked on a protest today about the state of insecurity in Ghana.

The peaceful demonstration dubbed ‘March for Justice’ was organised by the youth wing of the party.

The party faithful gathered at the Accra Mall very early in the morning to embark on the protest.

The main aim of the demonstration is to call on the ruling New Patriotic Party and President Akufo-Addo to deal with the lawlessness and insecurity in the country.

The protestors were mostly clad in black and red and also holding placards with inscriptions such as ‘Akufo-Addo, you are a dictator’, ‘#We are all Kaaka’, ‘No Justice for the dead, no peace’, ‘We feel your silence Akufo-Addo and Bawumia. Ghanaian lives matter!’.

Also, officials from the various security agencies were present to ensure law and order during the protest.