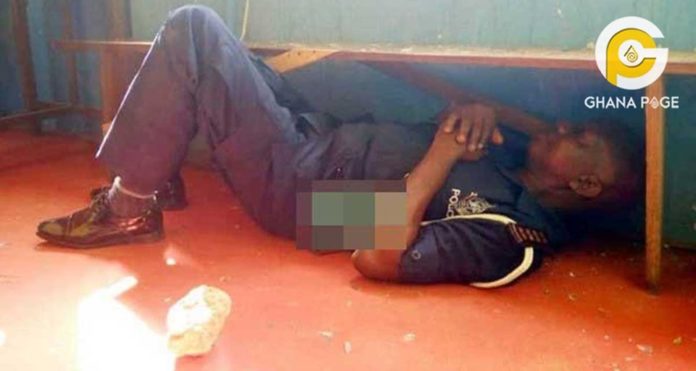 Chief Superintendent Donkor Baah who is the District Police Commander for Breman- Asikuma in the Asikuma Odoben Brakwa (AOB) District of the Central Region, is likely to be trolled on social after he choose a funny style to defend himself.

According to sources, the family of a suspect who died in their custody stormed the police station after he was arrested by a during a swoop at a popular Indian hemp joint in the town.

The family who were enraged by his death stormed the station and attempted lynching the commander and his subordinates while pelting stones at the structure breaking some glass windows in the process.

The police commander to hid under a wooden bench as the situation became more volatile to save his life from the angry family members who issued a 24-hour ultimatum to him to resurrect the dead person.

“The police assaulted the deceased physically after arresting him and our checks reveal he was declared dead upon arrival at the hospital after he was rushed there. We are giving a 24-hour ultimatum to the police to have something meaningful to tell us, else we will burn down the police station,” a family member who spoke on Accra-based Adom Fm threatened.

Reacting to their allegations, a fear-stricken police chief stated that the suspect did not die in police custody as claimed.