Obofour invited by the Police over church ‘wee’ smoking deliverance 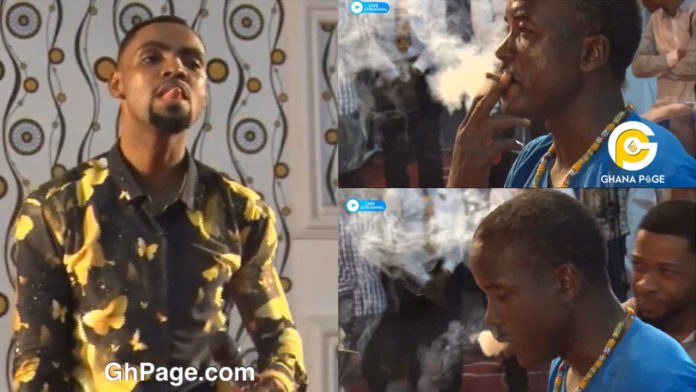 News reaching Ghpage.com has it that Reverend Obofour, the founder and leader of Anointed Palace Chapel has been invited by the Greater Accra Regional Police Command for questioning.

The invitation by the police comes after Obofour forced a man to smoke marijuana (wee) during church service at the church of Prophet Abruku Abruka at Sowutuom, a suburb of Accra.

During church, Obofour asked anybody who has wee on him to come forward. The gentleman came forward and confessed he has marijuana in his pocket.

Obofour went on to ask for a lighter and went ahead to order the man to smoke. He was a bit hesitant but Obofour told him not to be afraid of anything and smoke.

He went ahead to light the substance and started smoking right in the middle of the church with hundreds of people gathered there.

Although Obofour has defended himself that he was following the commandments of God, smoking marijuana is a crime in the laws of Ghana and the police want to get to the roots of this supposed miracle.

Meanwhile, Razak the gentleman who was made to smoke the wee has stated in an interview with Nana Agradaa on Thunder TV that he was paid by Prophet Abruku Abruka and Obofour to smoke the weed and subsequently to pretend to be delivered by Obofour.

Obofour has, however, come out to deny the allegation from Razak. Ghpage.com is following the invitation by police and we will keep you updated. Stay with Ghpage.com for all your news updates

Kumawood actress, Tracey Boakye has finally confessed that she was a big-time Pimp who introduced girls to big men.
Read more
Lifestyle