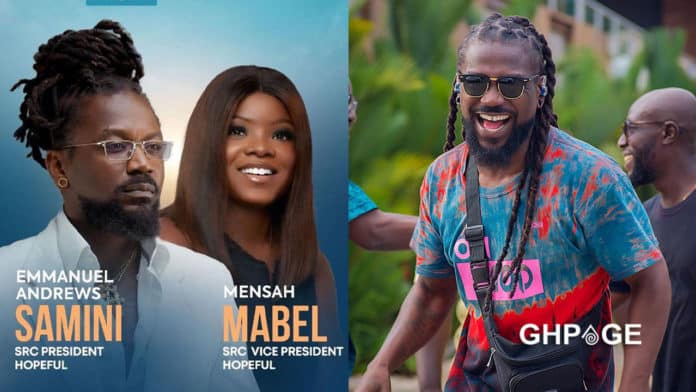 Ghanaian reggae-dancehall musician Samini will on Tuesday, August 23, be sworn in as President of the Student Representative Council (SRC) of the Ghana Institute of Management and Public Administration (GIMPA).

This follows his victory at the elections held on Wednesday, June 22, after he and his running mate, Mabel Mensah, garnered 307 of the valid votes cast while his opponent, Theophilus Quartey, obtained 212 of the votes.

Saminini – real name Emmanuel Andrews Samini – took to his social media handles to post a flyer of his swearing-in ceremony expected to come off at 11 pm.

Other executives elected for the 2022/2023 academic year will also officially assume office after they are sworn in.

The dress code for the occasion is “strictly corporate”, preferably suit & tie, according to the flyer shared by the musician.

In July, Samini announced his ambition to lead the student body when he put out a video campaigning for votes after he picked up forms to join the presidential race.

In a video he shared online, Samini said he had the leadership qualities required for him to be in such a delicate position thus he would count on the students’ votes, support and corporation in order to become the next SRC President of GIMPA.

One week later Samini was declared president-elect after he beat his opponent with 95 votes.

“Thanks to all who believed and encouraged me to go for the topmost… to my doubters I say a bigger thank you for making me see the need to prove you wrong,” he said in a tweet celebrating his victory.