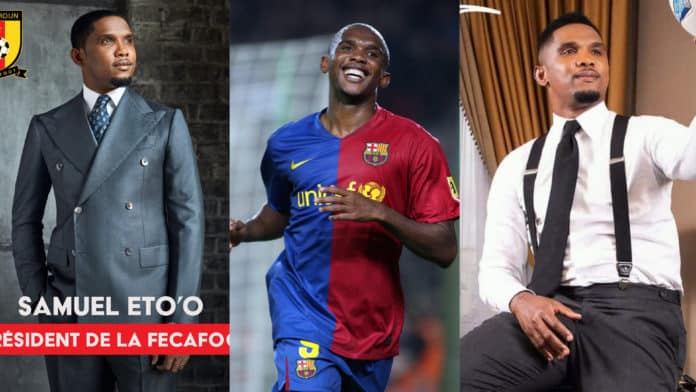 After five other candidates dropped out of the race, Eto’o defeated the interim President of Fecafoot, Seidou Mbombo Njoya.

Prior to his election, Eto’o served as the global ambassador for the Qatar 2022 World Cup, while Mbombo Njoya is the Confederation of African Football’s fourth Vice-President.

I’ll be remembering today as one of the proudest moments of my life. I’m deeply grateful for to be elected as the new president of @FecafootOfficie. Every vote represents the energy and ambition of our football family to take our beloved sport to a level we’ve never seen before. pic.twitter.com/2z8fjLBMLA

Maboang Kessack, Nyamsi Soter, Justin Tagouh, Jules Denis Onana, and Zacharie Wandja are among the other candidates who have withdrawn from the race.

The election was held at the Hotel Mont Febe in Yaounde and was overseen by Glibert Schlick, president of the Fecafoot Electoral Commission.

Eto’o’s election victory means he will now be in charge of the smooth operation of the 2021 Africa Cup of Nations, which will be held in Cameroon from January 9 to February 6.

Between 1997 and 2009, Eto’o played for Real Madrid, Leganes, Espanyol, Mallorca, and Barcelona, where he won several trophies including La Liga, Copa del Rey, Uefa Champions League, and Fifa Club World Cup, among others.

He continued his winning ways at Inter Milan for two years before moving on to Anzhi Makhachkala in Turkey and Chelsea and Everton in England.

The African legend finished his playing career in Qatar in 2019, four years after calling it quits for Cameroon, where he scored 56 goals in 118 games.