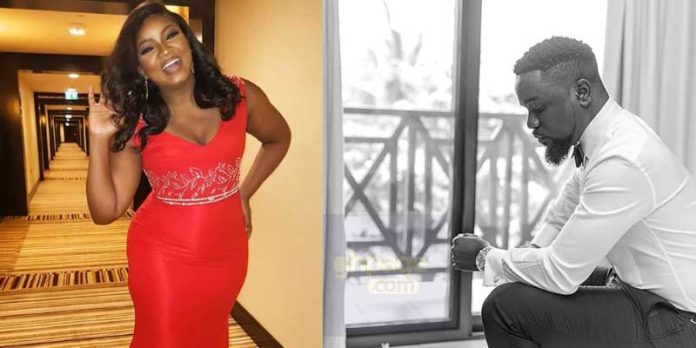 The 2018 version of All Africa Music Awards (AFRIMA) successfully took place at the Accra International Conference Centre with an awards celebration and people from all walks of life came to be a part of the event.

The famous awards which were folded with three days activities including a free concert on Thursday night at the Independence Square finally came off on Saturday, 24th of November at the country’s capital.

According to Omotola who was one of the many celebrities who were present to grace the occasion in an interview with GhOne Tv revealed that she was at the show to have a feel of the performance of the various artists from the African continent citing that Sarkodie is his favourite among all the Ghanaian artists.

The beautiful actress also revealed that Ghana’s Economy is far better than Nigeria’s.

According to the actress, upon her arrival in Ghana, she decided to change 10,000 Naira only to be given GHS 120 which in other words means the cedi was more valuable than the Naira.

Praising the new airport she revealed that she forgot her two phones at Immigration Desk after signing but she was surprised that after some few minutes an announcement was made on the P.A system and she went for her phones ate the Guest services desk.

Read this: Rare Photos of Jackie Appiah, Pawpaw, Tonto Dikeh, Kanayo & Others chilling to the fullest

Since the terminal 3 at the Kotoka International airport started operating several people across the globe have expressed how nice the airport is as compared to other African airports.

The likes of Gospel musician Eben, Nollywood actor Kanayo O Kanaya and others have recorded videos from the airport and blasted their government for not using their monies for any better than but just wasting it on useless things.

Read also: I have been betrayed – Anas makes a shocking revelation