Sarkodie,Samini,Funny Face others in the Supa Ghana 2pac ‘Challenge’

Supa also known as Ghana Tupa or Gully Bop has become the new sensation on social media and some Ghanaian celebrities such as Samini, Funny Face,Sarkodie have joined his challenge 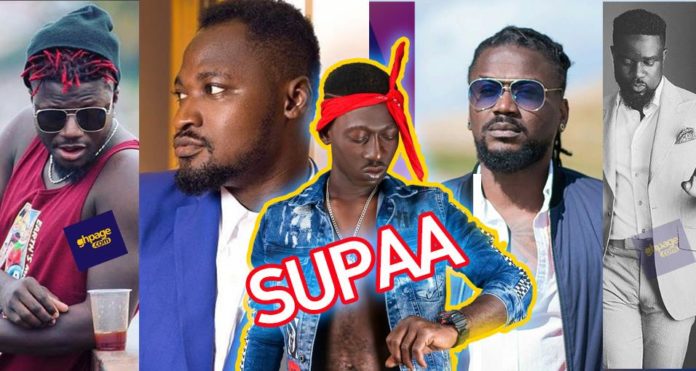 Supa is the new sensation. You can call him the new Patapaa without a hit song yet. Ghana is indeed an interesting country where several challenges will trend all over.

Who and what is the Supa challenge?

Supa also known as the Ghana Tupac is a new emerging rapper from Nima who for the past days has been trending all over social media.

This Ghana Tupac, Supa is seen as not having many teeth in his mouth which instantly draws your attention — and with his funky style of rapping which mostly ends with a weird style of walking has become the new wave.

His style is also similar to Jamaican’s entertainer Gully Bop.

Identified with a bandana headband just as we saw with Tupac,Supa’s style has now become a challenge with almost all the top Ghanaian celebrities wading into it.

Some of his entertaining videos which keep trending on social media has obviously resulted in a Challenge which has even earned him a meeting with star rapper Sarkodie.

Other Ghanaian celebrities such as Samini, Funny Face, Pope Skinny have joined the Supa Challenge, doing their own versions.

Watch the video below as Samini, Funny Face, Pope Skinny among other Ghanaians joined the Supa Challenge.