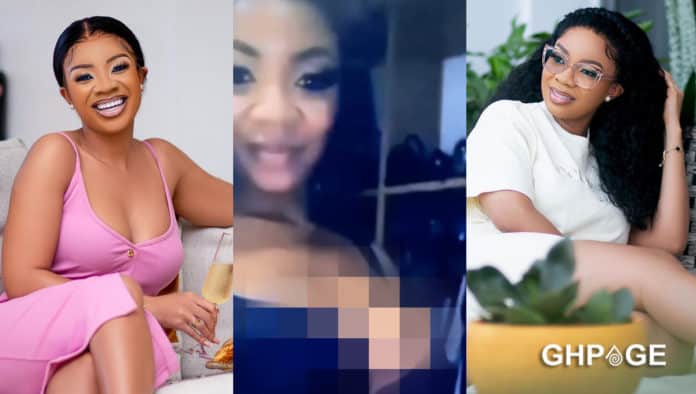 The sultry photos sighted by GHPage.com were shared by one Snapchat account with the handle @Bombshellis2021.

According to the source, the bedroom photos that captured Serwaa Amihere in a bra, standing in what appears to be an open closet, were part of a video sent to her alleged politician boyfriends who were supposed to be fixing the country but decided to fix boobs.

The anonymous source alleged that Serwaa Amihere sent them to three Ghanaian politicians she’s allegedly having an affair with.

The person behind the account disclosed that the photos were snapshots taken from a whole video and subsequently threatened to release the complete video in due course.

An alleged WhatsApp chat between Serwaa Amihere and one of her politician boyfriends also preceded the photos.

See the photos below for yourself

This is coming a few days after Ghanaian socialite and plus-size model, Abena Korkor, decided to go on a ranting spree, which ended with her dropping a series of evidence to expose Serwaa Amihere.

In one of the posts sighted on her Instagram account by GHPage.com, Abena Korkor spilt some secrets about Serwaa Amihere, a TV presenter at GhOne, and her amorous relationship with some top officials in the country.

The new gist made available to her was provided by a female informant who pleaded for her identity to be shelved for obvious reasons.

According to the source, Serwaa is the girlfriend of NPP Politicians, Sammy Awuku and John Boadu and she has been sleeping with both men.

She also claimed the two are aware of their sexcapades with Serwaa but it is not clear whether the award-winning broadcaster herself is aware she’s being played.

Pause and watch the full chat in the video below

The story keeps unfolding and GHPage is here to give you all the gist. Stay glued.