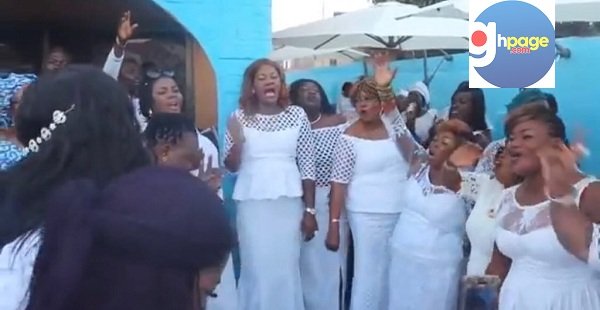 It appears despite the rants and threats to burn down churches by Shatta Wale following the prophecy that he will die by close of 2018, the family of the self-acclaimed Dancehall King is not taking the prophecy lightly.

The mother of the award-winning Dancehall singer, Mrs. Elsie Evelyn Avemegah over the weekend, 3rd March 2018 together with the “Shatta Mothers Association” held a prayer session to pray against the death prophecy hovering around Shatta Wale.

According to the Founder and Leader of Christ Vision Prayer Ministry, Shatta Wale is next to die and he will die before 2018 ends, so he claims God says. Shatta Wale was outraged by the prophecy and threatened to burn down churches of fake pastors if he is still alive by the end of 2018.

Shatta Wale’s mother together with the Shatta Mothers Association (a women’s pressure group who give arms to needy in the society— with Shatta Wale’s mother being one of the executives) held a powerful prayer session at the family house of Shatta Wale in Dansoman (Banana Inn) a suburb of Accra to avert the death prophecy.

Clad in all white, the women after the prayers danced to “Victory” by Nigerian singer Eben which implied their prayers have been answered. Speaking after the prayers, Mrs. Elsie Evelyn Avemegah said she is not relaxing concerning the prophecy. She added she wants her son to be 102 before he dies.

“I refuse that prophecy in Jesus name…that’s why I am praying all over the whole Ghana…I have been to Volta region and have come to Accra praying for my son— and I am trusting God that my son will never die…I want my son to be 102”, Shatta Wale’s mother said.

WATCH VIDEO OF THE PRAYERS BELOW