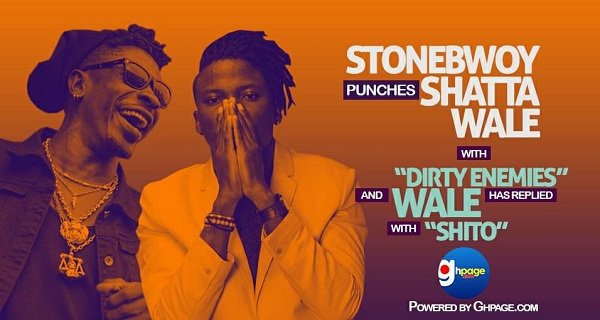 Besides the normal Independence Day celebration in Ghana, social media is rife with shades Stonebwoy and Shatta Wale have been throwing at each other in new songs they have both released.

SEE ALSO: Video: Shatta Wale has finally apologized to the police officer he assaulted because he stopped his car

“see them, they killing our youth, dissing the mothers and mocking the prophets”.

Then he questioned; “Somebody tell me the truth, after killing them then what is the profit. One thing I want you to do, run for your life before you end up in a casket…. Our enemies den dirty enemies”

Considering the fact that Shatta Wale is one of the main musicians who hype online fraudsters and even has a song for them, meaning of “killing our youth” said in Dirty Enemies is not hard to get.

SEE ALSO: Impressive!! Here Is The List Of Businesses And Companies Owned By Asamoah Gyan [Photos]

Again Shatta Wale is fond of insult mothers of other artists he has an issue with, he did to Samini, Kaaki etc. Recently Shatta Wale again was in the news for threatening to burn the down churches after labeling some pastors as fake pastors.So you see, the diss in Stonebwoy’s Dirty Enemies is directed at Shatta Wale, no doubt about that.

Well, Shatta Wale as we all know is not a walkover, there was no doubt he will allow Stronebwoy’s diss song to go unanswered. He has counted with a new song titled “Shito”

In ‘Shito’, Shatta Wale called Stonebwoy Judas who is an enemy but disguises himself as a righteous person. He also talked about Stonebwoy being jealous of him joining Zylofon Media.

LISTEN AND DOWNLOAD both Dirty Enemies and Shito below

SEE ALSO:  Meet Ama Governor, the Ghanaian lady whose marriage proposal to her fiancée at the Accra Mall was rejected [SEE PHOTOS]