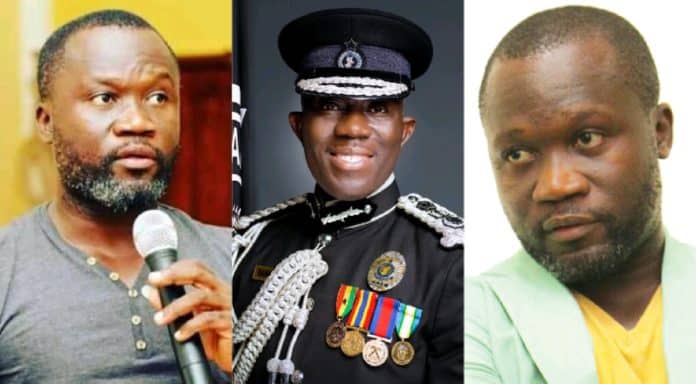 Speaking on ONUA FM with AJ Sarpong, Ola Michael argued that the IGP is doing his job as an ordinary Ghanaian citizen so he doesn’t understand why a lot of Ghanaians see him as some sort of Messiah.

Controversial Ola Michael further fumed that, there’s nothing extraordinary about what he has been doing since he assumed which should warrant all the praise.

He also bashed the IGP for harshly dealing with Shatta Wale and Medikal just to send a message out there that he’s working.

“We need to stop praising him. Dampare, it’s getting sickening by the day. Is he doing anything about the deaths that occurred during the election? There were ministers and MPs brandishing guns, not to mention shooting them.”

“What has he done to address this? I’m still waiting for him to reject his salary, at which point I’ll say, “Yeah, there’s a new guy.” Until then, it’s all a bit of a shambles. “Now that we’re in Ghana, people will start crucifying him,” he said in Twi“

“When you believe you are punishing a celebrity, you are actually increasing their fan base and popularity. The IGP is doing well, but you should refrain from lavishing praise on him. He’s just doing his job. Do you get the same compliments on your work, AJ? He’s doing what he’s been paid and assigned to do.”

It can be recalled that some few days ago, Sammy Gyamfi knocked hard at the IGP and referred to him as a ‘Celebrity IGP’.

According to him, instead of the IGP arresting corrupt government officials, he’s wasting the nation’s resources on the arrest of celebrities who have not committed any serious crime.

Ola Michael and Sammy Gyamfi appear to be in the same boat as they share the same sentiments about the IGP who has won the hearts of many Ghanaians.