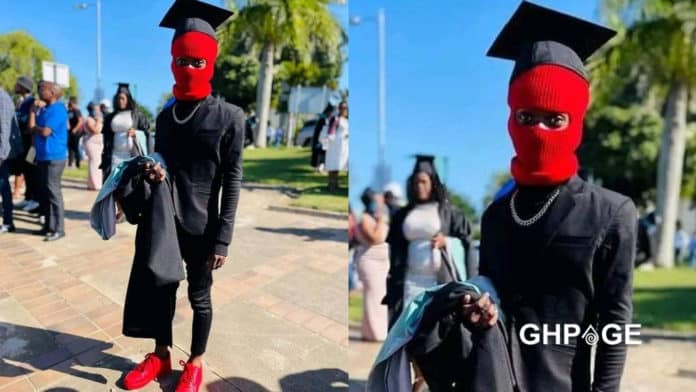 A young man has stoked mixed reactions on social media following a viral photo of him wearing a red balaclava, also known as a ski mask, during his graduation day at the university.

According to reports attached to the picture, the graduate who hails from South Africa disguised himself to outsmart evil persons around him and evade their antics.

Although the mask seemed like a fashion accessory to complement his outfit, it’s alleged that thoughts of being a target of a spiritual attack that could ruin his life influenced his looks.

A Twitter user who shared the photo on the microblogging platform wrote: ”This guy refused to remove his balaclava during graduation because he’s afraid of witchcraft.”

If the claims are anything to go by, then it appears the young man is probably aware of the modus operandi of people close to him, hence deciding to take precautions to save himself from predicaments.