Unseen photos of Pkay, the cheating boyfriend whom Karen beat up with a slipper 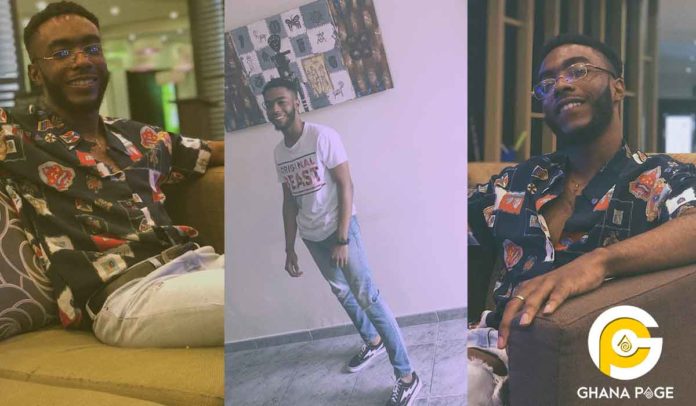 Yesterday, social media was set ablaze when a viral video of a University of Ghana student now identified as Karen striking her cheating lover surfaced online.

Per our checks, the boy who was being struck in the video is known as Papa Kofi Owusu Kwarteng, simply known as Pkay to his friends.

Why was Pkay being struck in the video? According to Karen’s side of the story Pkay was romantically involved with her yet he still went around proposing to other girls.

When she got wind of PKay’s flirtatious actions and confronted PKay but he didn’t seem remorseful. Angered by his lack  of remorse, she picked up a bathroom slipper popularly known in Ghanaian parlance as chalewote and began striking him continuously.

Pkay however did not make an attempt to strike her back. Many are hailing Pkay as a true gentleman others are strongly convinced that he is a coward, popularly known as ‘otoolege’.

Personally, I think Pkay is indeed a gentleman for not striking a lady even though he was obviously being provoked. If it had been the other way round, Ghanaians would have lost their cool and cried foul.

GhPage.com has chanced upon some pictures of Pkay and from what we’ve seen, Pkay is a very handsome gentleman.

HERE ARE SOME PHOTOS OF PKAY:

Wouldn’t you agree that Pkay a handsome gentleman?

On a more serious note, many onliners including GhOne’s news anchor and editor, Nana Aba Anamoah have urged Pkay to file a report with the police and subsequently sue Karen for assaulting him?

What would Pkay do? Everyone is curious. We have reached out to him to hear his side of the story and what he intends to do about the whole situation.

Keep visiting this portal as we bring you prompt updates on this story.

GhPage.com has sighted a viral video of a female University of Ghana student who goes by Karen, battering her lover indentified as Papa Kofi...
Read more
Relationship

All the potential boyfriends I meet are broke – Young lady cries

Ladies generally like being in a relationship with a man that is financially upstanding and ladies who able to ‘secure’ themselves a man who...
Read more
Relationship

Even if you don't always agree with their ways, try your best not to put up an attitude that will cause her to dislike...
Read more
Relationship

7 things you should never say on a first date

If your first date ever went wrong, it probably had nothing to do with the venue you chose to eat at but everything to...
Read more
Lifestyle

A man from US is currently trending on social media after he bragged about impregnating twin sisters. The man, Keonyae Banks from Compton, California...
Read more