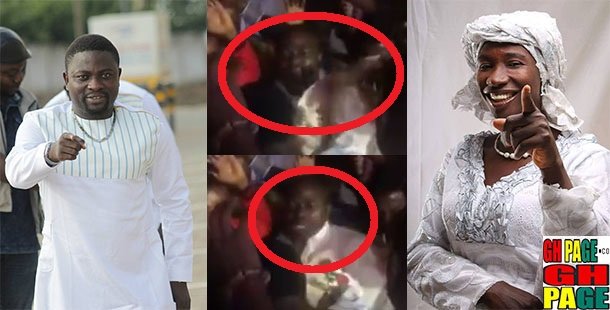 The prophetess Cecilia Marfo who doubles as a Gospel musician has a Worship Conference Centre which is also called ‘Osorie Fie’.

‘Osorie Fie’ has been one of the worshiping centers in the country seen always to usher themselves into every new year.

She holds a church service always, purposely to thank God for protecting His people from the start of the year to the end of it without any blemish and keeping us alive to see another new year.

SEE ALSO: Photos: Asantehene’s Garage Is A Tourist Site To Visit-Check Out His Luxury Cars In Display

At this time, the biggest and much attended ‘TsooBoi Praise’ was held at Mampong nursing which saw many Gospel artists such as  Brother Sammy, Ernest Opoku, Opiesie Esther, Mabel Okyere, Akimedes, SK, Wambantem among others. Rev. Kwesi Donkor and Rev Jojo Fyn.

The video saw many people on the grounds. In a prayer session, Prophetess Cecelia Marfo tried to deliver Bro Sammy from evil spirit which ended in slaps during the deliverance.

SEE ALSO: Photos: Fan Writes To Mercy Johnson, “Don’t End Up Like Tonto Dike oo”-See Her Reaction To That

“God bless my congregants Osoriefie and my Helping Pastors for their support. My Husband and my Management”, she posted on Facebook.

“May whatever anyone lost because of this event be replenished in Jesus Name. God bless every soul who was able to appear there. Let us keep believing in God for miracles after this event. He has promised and He will fulfill His Promises”, she however said.