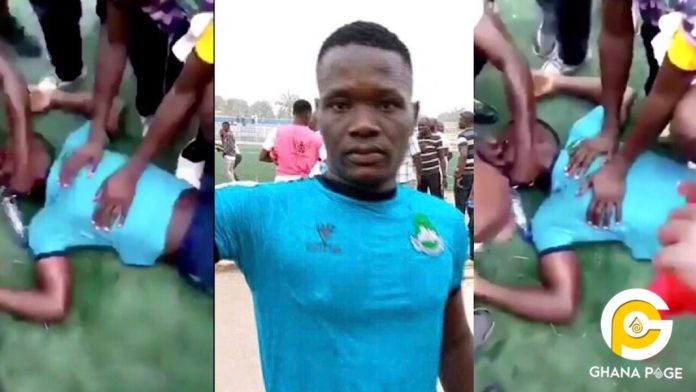 GhPage.com has gathered that Chineme Martins a Nigerian defender has slumped and died during a league match in Nassarawa State, Nigeria.

The unfortunate incident occurred over the weekend when Nassarawa United clashed with Katsina United in a football match. According to sources who were at the scene, the deceased collided with a player from the opposing team and suddenly collapsed.

Chineme was then rushed to the Dalhatu-Araf Specialist Hospital in Lafia where he was pronounced dead on arrival.

Reacting to the sad occurrence, Chairman of the League Management Committee (LMC), Shehu Dikko, said the league is terriblly saddened by the untimely demise of the promising young player.

“We commiserate with Nasarawa United and the immediate family of the late player.”

He also included that an autopsy would be conducted to ascertain the actual cause of the player’s death.

“It is hoped that the findings of the autopsy would inform subsequent measures, if any that has not been addressed by the existing standard procedure.” Mr Dikko added.

His colleagues were heartbroken when they received the unbelievable news of Chineme’s death. They broke into uncontrollable tears mourning their former teammate.

GhPage has received a video of the moment when Chineme slumped on the pitch. In the video, teammates and officials tried the best to resuscitate him to no avail.

After critical analysis of the video, it came to our realization that there were no medical professionals on ground that would have given him the necessary attention.

We have also gathered that was also no ambulance on ground to quickly transport him to a medical facility for professional care.

Indeed Chineme Martins’ death is very tragic but could have been absolutely avoidable if there were health officials on ground to offer him first aid that could have kept his alive. It is undoubtedly a case of negligence on the part of the club’s management.

We very well understand it is not the time to apportion blame but we sternly believe that if precautionary measures such as situating ambulances in close proximity whilst a game is in progress, such situations could be easily averted.

The entire staff of GhPage mourns with the family of the deceased and pray for solace in their time of grief. Rest in Peace Chieme Martins

Police give full details on why Bobrisky was arrested and detained

We reported earlier that popular cross-dresser Bobrisky had been arrested and detained by the Nigerian Police force.  As at...
Read more
Nigeria News

Popular Nigerian transgender Bobrisky has been arrested again by the Nigerian Police. According to a source, the reason for...
Read more
Nigeria News

It would be recalled that some days ago, a viral video surfaced on social media where a young woman was been beaten...
Read more