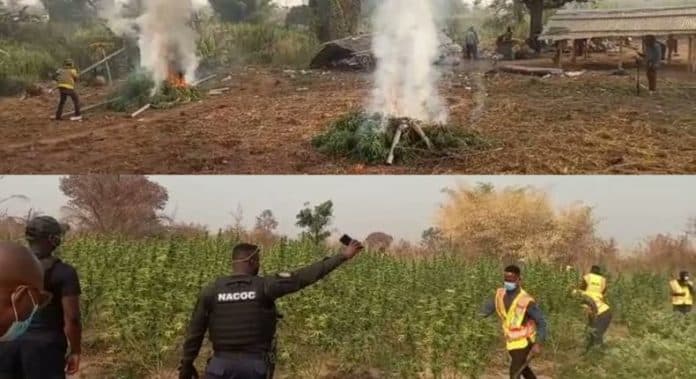 The farmers who were on the farm absconded, so it’s unclear who owned the farm.

Four farm workers, one male and three females, have been arrested and are cooperating with investigators.

The farm was discovered by security officers on Tuesday, February 1st, and the arrests were made. They returned to the farm on Thursday morning with the intention of destroying it.

The large cannabis farms scattered throughout the forest are reportedly owned by various individuals who have planted corn to serve as boundaries between their respective farms.

The farmers strategically laid irrigation pipes from a nearby stream to the farms to irrigate the cannabis, allowing them to produce all year regardless of the rain pattern. They have also connected electric power to the farmlands in order to boost productivity.

The team also discovered several water pumping machines, two motorcycles, and a tractor in sheds that serve as rest stops for farmers.